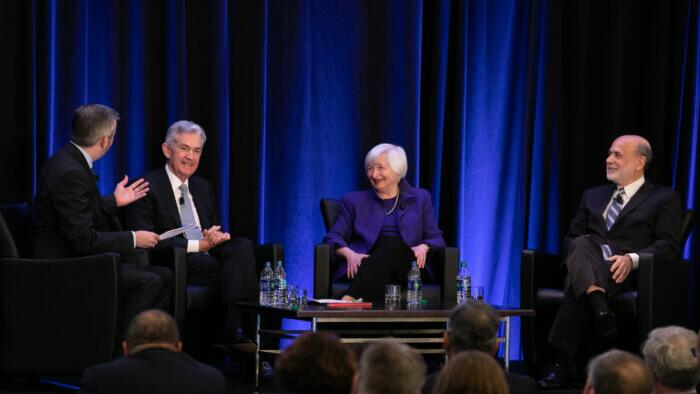 Authored by Jeffrey Tucker via The Epoch Times,

Some facts of our times follow. As you read, consider your own household and portfolios and how they measure up.

Disposable personal income per capita has been in decline in real terms for 19 straight months. This is not just dollar amounts but dollars adjusted for purchasing power. We are just now level with 2019, which is to say that Americans have lost three years of financial progress.

Savings has hit a new low of 3.2 percent, which is where it stood just after the 2008 financial crisis, and this contrasts with 6 percent rates after 1980 and 10 percent average rates in the postwar period.

Credit card debt just jumped to a 20-year high and is still soaring.

Money, credit, and capital are draining from long-term investments, drying up the venture capitalists and putting a tight credit squeeze on large businesses where firings in the professional sector have already begun.

Inflation is still embedded and this is because consumers have come to expect it and adjust their spending habits accordingly, plus wage costs are rising in sectors like hospitality, retail, and manufacturing.

As an example, the latest housing-price data shows annualized inflation at 15.4 percent year over year, even as the buyers’ market is mostly locked up. That’s the very essence of stagflation: rising prices amidst declining output.

It might seem strangely calm out there as we approach the holiday season but the underlying realities are nothing but. An economy cannot live this way, with business deleveraging even as households are taking on ever more debt while the currency is being devalued.

It’s becoming incontrovertible that a conspicuous recession awaits if it is not already here.

What’s unfolding before our eyes is a confirmation of a business cycle theory pushed in the 1920s and 1930s by Ludwig von Mises and F.A. Hayek. The so-called Austrian theory observes the distortions in the production structure that result from central bank attempts to suppress interest rates, which is exactly what the Fed has done.

While the results are not manifested in higher overall prices (think of 2008–2020) such a policy pushes resources out of shorter-term investments into longer-term speculative ventures. The problem is that speculative capital investment in this case is not justified by the existing pool of savings. Indeed, the central bank policies have caused “forced savings” with the result of unsustainable business empires.

Hayek uses ferocious language to describe the wealth transfer that is happening here: “This causes a part of the social dividend to be distributed to individuals who have not acquired legitimate claim to it through previous services, nor taken them over from others legitimately entitled to them. It is thus taken away from this part of the community against its will.”

When things become shaky or prices start to shift, and the central bank starts to back off its pillaging policies, the house of cards starts to fall apart, as resources are drained from long-term speculation to shorter term consumption and the restarting of real savings.

That is precisely where we are in the cycle.

Meanwhile, Washington is still dreaming of new ideas to kill our economic prospects. These include zero-carbon delusions that would literally reverse the Industrial Revolution, a monetary reform that would bake surveillance into every transaction, ridiculous and coercive pandemic planning, and ever higher taxes to transfer resources from us to them.

The failure of the Republicans to retake the Senate or otherwise achieve anything truly decisive puts off possible fixes to this mess far into the future. It is a future we might not have because time is running short. The candle is burning at both ends.

To be sure, we should all in a macroeconomic sense look forward to a new age of more honest finance. The disaster of zero interest rate policy is finally coming to an end. Ben Bernanke’s Nobel Prize notwithstanding, this policy massively distorted capital allocation in the economy, and around the world, for the better part of 14 years. With its end, we are going to get a taste of some economic and financial rationality.

We might even be able to save money without losing money. So in that sense, the man who bears the main responsibility for inflation, Jerome Powell, is the same guy who will finally fix what Bernanke broke all those years ago. Remember those days when everything seemed too good to be true? There was a financial crisis that the Fed magically fixed with no downside.

Except that there was a huge economic, cultural, and social downside. Frugality and prudence gave way to massive excess and a level of craziness in culture we never imagined we would experience. Among the costs are a bloated and overbuilt professional labor sector that would eventually favor and push lockdowns as the answer to a widespread virus. It was just their excuse for staying home and forcing the working classes to bring them groceries.

What made this preposterously unjust system possible was the Fed with Bernanke at the helm. Quantitative easing turns out to mean upending all normal life and paying the horrid price for this a decade and a half later.

As Bloomberg put it: “The great quantitative easing experiment was a mistake. It’s time central banks acknowledge it for the failure it was and retire it from their policy arsenal as soon as they’re able …. That’s why central banks need to admit QE was a mistake. Their credibility is already at stake after they underestimated inflation. Now is the time to take a hard look at monetary policy over the last decade and rethink what worked and what didn’t. Otherwise we’ll be stuck with QE forever.”

As with 1980, and the pain experienced with that recession, we might have rising prosperity to look forward to in about two or three years, at best. But that really does depend on a full policy pivot from D.C. toward massive spending cuts, deregulation, and tax relief. Nothing could be both more urgent and more implausible right now.

As a consequence, we have household budgets stretched beyond any sustainable level. And you know this if you shopped for Thanksgiving groceries, which are up 37 percent over what you paid two years ago.

Right now, consumers and producers are screaming to make it stop. What they mean is that they want life to return back to normal. Sadly, absolutely no one in Washington believes that it is possible or desirable. The best scenario right now is that matters become less bad so quickly. But there will be no going back to 2019 prices under the current plans.

What that means for households is that something needs to change, and fast. The debt needs to be paid off. The credit cards need to be cut up. The dinners out and vacations must be curbed. Frugality needs to become the norm. And not just frugality but actual privation. The middle class needs to change its ways. Sadly, for the poor, there is no way out from what is coming. As for the rich, they will of course be fine as always.

As for government finance, there are no words to describe the amount of red ink. With interest rates rising, so too will be the burden of servicing this debt for the U.S. Treasury. Meanwhile, leadership in Washington looks at this data with a kind of nihilistic who-cares attitude. The old days of public-spirited rulers are gone. It has been replaced by an attitude more like FTX’s Sam Bankman-Fried: steal everything that is not nailed down.

The American public is nowhere near woken up to the reality, but Europe knows what is up. The chaos is both political and economic as people have awakened to what their ruling classes have done to them. We also need to be newly aware and start preparing before it is too late.

Some day, historians will look back at our times as a great turning point. We’ve been through calamity and it worsens by the day. Will we enter into a new Dark Age? Or find the light and crawl our way toward it before it is too late?