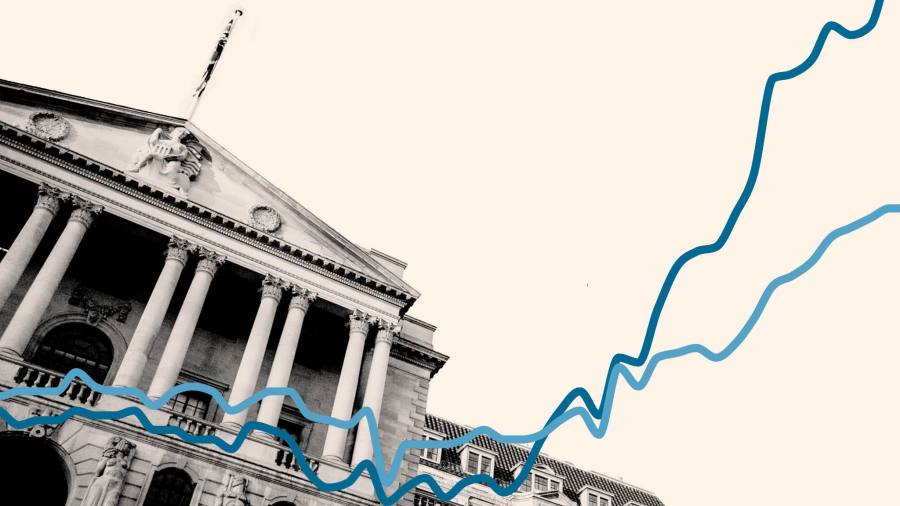 Analysts said the flow of official data over the past two weeks was largely supportive of further monetary tightening by the central bank.

The economy grew unexpectedly in November, with gross domestic product increasing by 0.1 per cent compared with October. It suggested the UK did not fall into recession in the final three months of the year, as had been widely anticipated.

The labour market remained buoyant. In the three months to November, 27,000 jobs were added compared with the previous three months, and nominal wage growth rose to a near-record high.

Inflation meanwhile edged down to 10.5 per cent in December, from 10.7 per cent in November. But growth in the prices charged by services companies, considered a better measure of domestic inflationary pressure, accelerated.

Markets are pricing in a 67 per cent probability that the BoE will raise interest rates by 0.5 percentage points next month, from the current level of 3.5 per cent. Rates were at a historic low of 0.1 per cent in November 2021, but have risen sharply since then as the central bank strives to curb high inflation.

The BoE Monetary Policy Committee at its February 2 meeting “may well conclude that it has more [monetary] tightening to do to bring medium-term inflationary pressure to heel”, said Sandra Horsfield, economist at Investec.

The recent economic data “skew the risks towards [a 0.5 percentage point] hike [in interest rates] in February,” said Ruben Segura-Cayuela, economist at Bank of America.

The rise in gross domestic product in November means the UK could have avoided a recession in 2022 after the economy contracted in the third quarter. A technical recession is often defined as two consecutive quarters of decline.

“The economy appears to have been remarkably resilient so far to the dual drags of high inflation and higher interest rates,” said Ruth Gregory, economist at Capital Economics.

She attributed the resilience in part to the recent fall in wholesale gas prices as well as government financial support for households and businesses with their energy bills.

The FTSE 100 index has been close to record highs in January and Susannah Streeter, analyst at Hargreaves Lansdown, said investors had been buoyed “by more resilient [UK] consumer spending in November and China’s [lifting of Covid-19 restrictions], which is fuelling expectation that supply chains problems, which have caused goods shortages, will ease further”.

However, James Smith, economist at ING, said “it’s too early to say conclusively that the [UK] economy is proving more resilient”.

Some data has highlighted clear weakness in the economy. The GfK consumer confidence survey deteriorated in January, to a 50-year near-record low. Retail sales unexpectedly fell by 1 per cent in December compared with the previous month, as Britons responded to the cost of living crisis by further tightening their belts.

The property market showed further signs of a sharp downturn, with the official house price index recording a fall in November.

Elizabeth Martins, economist at HSBC, said while strong private sector pay growth and high services inflation provided “hawkish data”, and made the case for a [0.5 percentage point interest rate rise], the disappointing retail sales “are a reminder that there is a dovish case [on monetary policy] to be made too”.

She added the decline in the housing market data “may be just the beginning” of a larger fall in consumer spending.

Given the mixed data since December, Holger Schmieding, economist at Berenberg, said he expected divided views on the size of any interest rate rise among the MPC’s nine members at the February meeting.

Interest rate rises affect the economy with a considerable time lag, and market expectations that they will peak at 4.5 per cent this summer could unleash a recession in 2023. Most economists expect a prolonged downturn.

“The bulk of the drag on real activity from high inflation and high interest rates probably has yet to be felt,” said Gregory. “This is one reason why we still think there will be a recession this year.”

Streeter said high interest rates “will pile more pressure on borrowers, will further weaken a rapidly slowing housing market” and erode already low consumer confidence. It means that “a recession may only have been delayed, and not avoided”, she added.

With most analysts expecting an economic expansion in the US and the eurozone in 2023, the UK will continue to be a laggard. Britain is the only G7 country not to have restored GDP to pre-pandemic levels.

Many factors that analysts blame for the UK’s underperformance could continue to drag on growth this year.

More people in Britain than in most other developed countries have left the labour force since the start of the pandemic, limiting production and adding to price pressures. Over the past three years, the UK has been missing much of the export dynamism of other industrialised nations.

British inflation is higher than in many other large economies, and UK business investment has been lagging behind historical averages, due to the uncertainty unleashed by the 2016 Brexit referendum.

Yael Selfin, economist at KPMG, said “the bottom line is that growth has slowed across all main sectors of the [UK] economy and that will likely result in a technical recession this year”.