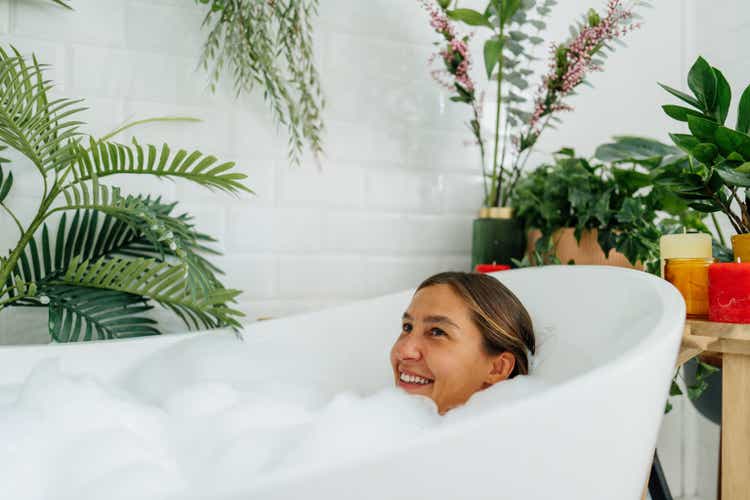 Bath & Body Works, Inc. (NYSE:BBWI) should see growth as a result of store reformatting and new category expansion. BBWI can provide an excellent return from covered call premiums and dividends even if the stock does not move much.

The company generates most of its business in North America, with less than 5% of sales from international markets. For fiscal 2021, 72% of sales stemmed from the 1,700 brick-and-mortar stores, up from 65% in 2020, as consumer shopping patterns began to return to normal. Future growth is expected from store reformatting and new category expansion.

BBWI completed 51 North American real estate projects in the third quarter with 31 new off-mall stores and 20 remodels, according to their Q3 press release. Year-to-date, they have permanently closed 34 stores and anticipate about 50 closures for the full 2022, principally in malls. They are forecasting approximately 100 new off-mall North American stores this year, resulting in net square footage growth of about 6% for the entire year. About 50% of stores at year-end will be off-mall, and almost two-thirds will be in the White Barn store design. Their entire store fleet continues to significantly outperform pre-pandemic levels, led in strength by their non-mall locations.

New Products Being Rolled Out

BBWI recently launched a test of MOXY products online and in 11 stores, according to their Q3 press release. This new line includes face and hair care products and dietary supplements designed to help customers reach their skin, hair, and wellness goals from the inside out.

The Men’s business continued to significantly outpace the overall shop with the launch of Leather & Brandy and Coffee & Whiskey, which exceeded their expectations. The Men’s business continues to increase as they test new forms and merchandising ideas to further fuel this growing business. In the fourth quarter, and for the first time, they launched a new single fragrance for the Men’s business, After Dark. Their new men’s antiperspirant deodorant is already in 650 stores and will roll to the balance of the chain in Spring 2023.

BBWI has a perpetual introduction of unique product offerings, with floor sets rotating every four to six weeks on average.

BBWI’s loyalty program enrollment results have exceeded expectations, with more than 21 million members enrolled. Loyalty members make up more than a third of their overall customer base. Loyalty sales represent about two-thirds of total U.S. sales since the August launch.

While revenue fell 5% year-over-year to $1.6 billion, it exceeded expectations by $40 million. More importantly, the company delivered an EPS of $0.40, double the analysts’ $0.20 forecast. They also raised the full-year outlook for earnings per diluted share from between $2.70 to $3.00 to between $3.00 and $3.20 during a time when general retail demand is showing signs of being slower than usual around the holidays. The consensus was at $2.89.

BBWI saw out the quarter with inventory up by only 10% from the same period a year ago, a performance 20+ points better than Q2’s 33% uptick. The company’s Q4 guide called for year-over-year inventory growth of +mid-teens.

Unfortunately, Bath & Body Works is not immune from economic headwinds, and the company expects Q4 sales and earnings will be less than Q4 of last year but well ahead of the pre-pandemic 2019 levels.

Global personal care and beauty industry veteran Gina Boswell will be Bath & Body Works’ next Chief Executive Officer as of December 1st. Gina brings more than 30 years of experience, including leadership roles at global companies such as Unilever, Alberto Culver Company, and The Estee Lauder Companies. She brings deep expertise in sales, marketing, brand-building, and business development and strategy, along with strong operational experience and a demonstrated track record of delivering successful business outcomes.

The share price of BBWI traded at $41.00 on November 22nd. I’ve added the green Fibonacci lines, using BBWI’s high and low for the past five years. It’s interesting to note how the market pauses or bounces off these Fibonacci lines. They can be one clue as to where the stock price may be headed. BBWI is below the 50% Fibonacci retracement level but could go lower. However, I believe that BBWI will trade above $40.00 by May for the reasons in this article.

The five most accurate analysts have an average one-year price target of $55.20, indicating a 34.6% potential upside from the November 22nd trading price of $41.00 if they are correct. Analysts are just one of my indicators, and they are far from perfect, but they are usually in the ballpark or at least headed in the right direction with estimates. They often seem optimistic, so I suspect prices may end up lower than their one-year targets to be on the safe side.

BBWI net margins for the past ten years show growth since 2013 and are now near 8%.

BBWI’s operating margin trend for the past ten years shows they were able to handle the inflationary cost increases.

My answer to uncertainty is to sell covered calls on BBWI six months out. BBWI traded at $41.00 on November 22nd, and May’s $40.00 covered calls are at or near $6.80. One covered call requires 100 shares of stock to be purchased. The stock will be called away if it trades above $40.00 on May 19th. It may even be called away sooner if the price exceeds $40.00, but that’s fine since capital is returned sooner.

The investor can earn $680 from the call premium and $20 from the February dividend while losing $100 from stock price depreciation. This totals $600 in estimated profit on a $4,100 investment, which is a 30% annualized return since the period is 178 days.

If the stock is below $40.00 on May 19th, investors will still make a profit on this trade down to the net stock price of $33.80. Selling covered calls and dividends reduce your risk.

Bath & Body Works stock has already popped from $31.00 shortly before earnings to $41.00 on November 22nd, just after their earnings announcement. I expect BBWI stock price to be above $40.00 by May 19th for the reasons in this article. Even if Bath & Body Works, Inc.’s stock price only moves from $41.00 down to $40.00 by May 19th, a 30% potential annualized return is possible, including a covered call premium and a dividend.