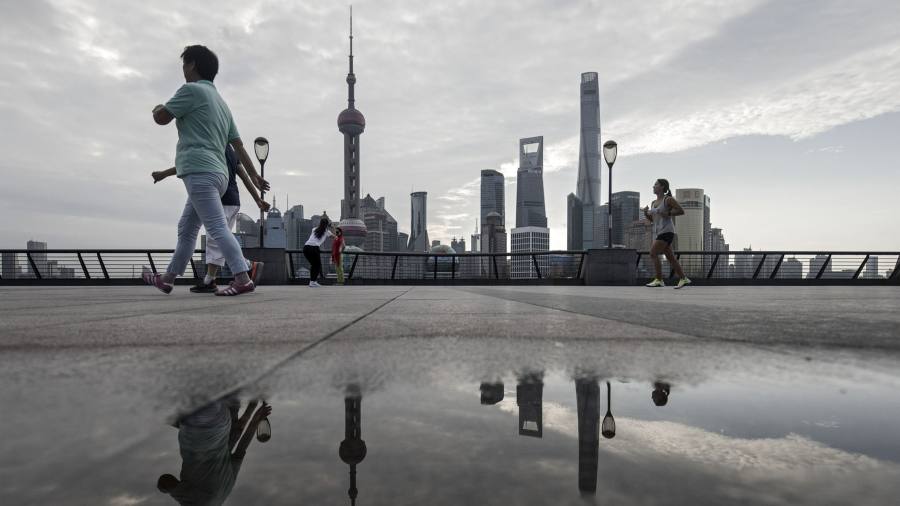 Meyrick Chapman is the principal of Hedge Analytics and a former portfolio manager at Elliott Management.

The Federal Reserve is causing a fine mess in China. Driven by the rapid rise in US interest rates, Chinese banks are rapidly deleveraging their dollar balances.

To a large degree the fall in dollar holdings in China reflects the unwind of the global dollar carry trade. This strategy was in response to zero-interest rate policy from 2009 onwards and entailed borrowing low-interest currencies and lending higher interest currencies. A BIS paper from 2015 details how a version of this trade encouraged dollar-denominated debt issuance:

Non-financial firms from emerging market economies (EMEs) have used US dollar bond issuance to take on financial exposures that have attributes of a dollar carry trade, in addition to any use of such funds for real investment.

This version of the trade was gargantuan, with the side effect that the Chinese banking system accumulated large dollar deposits and loans. In effect, China operated as a Greater Dollar Area.

All things must pass, and Fed monetary tightening has made the carry trade very unprofitable. Unwinding means a sharp reduction of outstanding dollar balances in the Chinese financial system.

The flows out of Chinse dollar holdings neatly match the behaviour of the renminbi against the dollar. When dollar balances are converted to renminbi this expands Chinese money supply, which is tantamount to reducing the value of renminbi. It is by no means the only factor, but it isn’t surprising that the renminbi has lost value against the dollar in line with the decline in Chinese dollar holdings.

One other noteworthy factor is that the reduction in dollars accelerated markedly after the invasion of Ukraine in February this year. Sanctions imposed on Russia may have panicked Chinese monetary authorities into directing the reduction in dollars held in their system. Divestment of dollar loans from end-February to end-September amounted to $170bn, while dollar deposits declined $140bn, collectively equivalent to a reduction of $5bn exposure per week. The reduction has been more-or-less equal between local dollar customers and foreign customers.

The effects of Chinese deleverage extend far beyond China. Only a small portion of Chinese bank balance sheets are denominated in foreign currency — roughly 3 per cent. Yet, deposits and loans at Chinese banks due to foreigners are overwhelmingly denominated in dollars. In the last decade, the Chinese financial system intermediated vast quantities of dollar carry trade for other emerging economies, no doubt taking a commission along the way.

Foreigners’ dollar holdings in the Chinese system are now collapsing even faster than domestic holdings. Strikingly, the deposits and loans of foreign customers remained constant this year if denominated in renminbi, while local deposits and loans shot up. It looks like foreign customers were forced to sell dollars to match the rise in the value against the renminbi. Partly this is a function of the carry trade unwind, but the stability of balances in renminbi suggests Chinese authorities may have instructed their banking system to limit foreign exposures to some renminbi limit.

This wander into Chinese bank balance sheets is diverting. More arresting, if speculative, are questions arising from the change in dollar asset composition.

Three asset categories account for all the change in the dollar balance sheet since February 2022. Overseas Loans and Reverse Repo have fallen, and Portfolio investments have risen. Taken together these categories more-or-less exactly mirror the behaviour of total dollar deposits on the liability side. So, if the banks were indeed told to hold fewer dollars, these categories suggest the main route in which they enacted that decision.

We have no way of knowing if the equity banks have accumulated previously belonged to foreign borrowers whose loans have now been curtailed. But it would make some sense. There has long been a suspicion that Chinese lending to emerging economies came with unpalatable conditions.

As global economic and monetary conditions deteriorate further, perhaps we should expect the ‘portfolio investment’ category to increase while the overseas loan category continues to decrease. It is at least possible the Chinese banks are fleeing dollars while partially disguising their flight by accumulating emerging economy assets. The debt-for-equity swap may have only just begun.