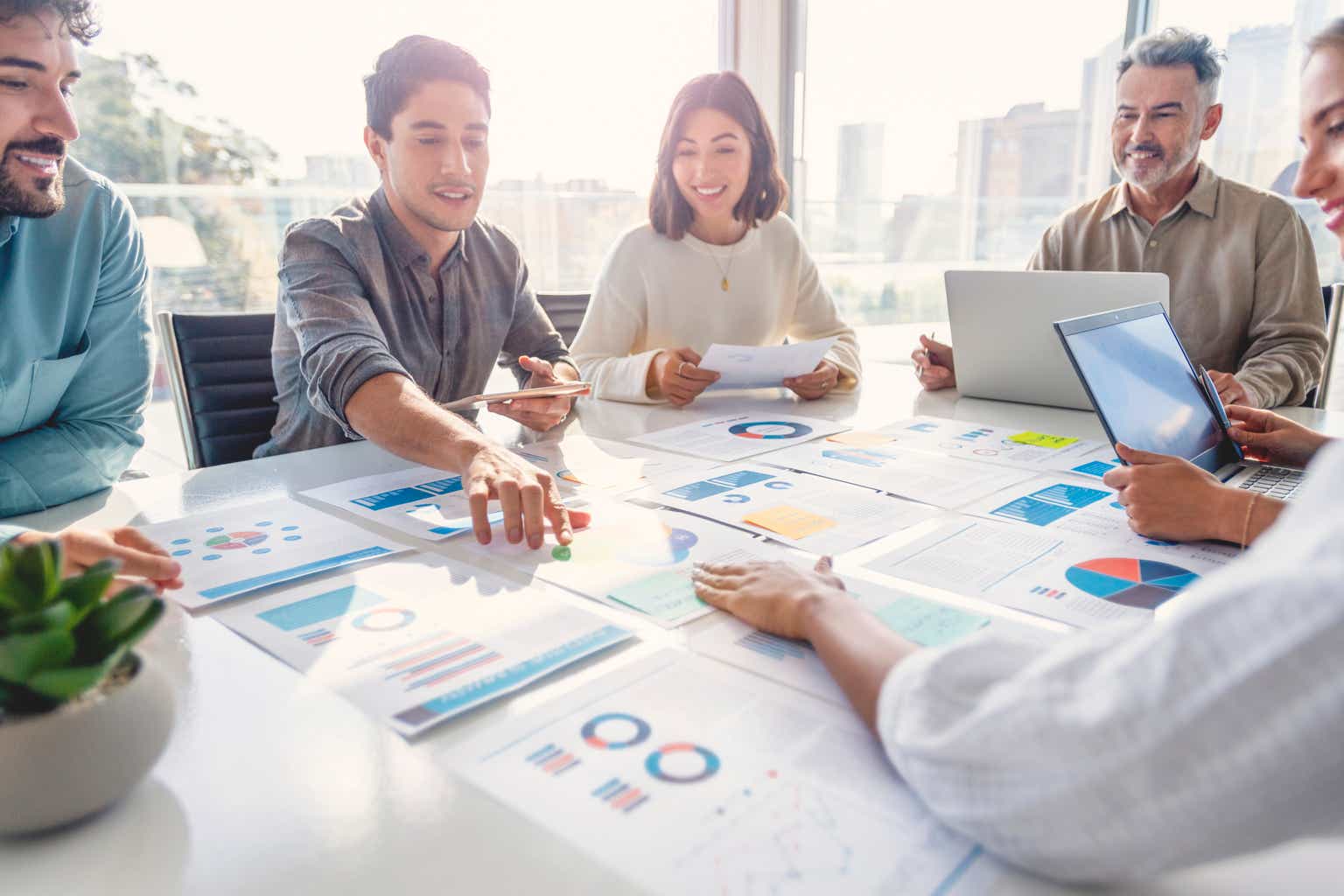 The buy case for Dun & Bradstreet (NYSE:DNB) is that it is a leading player in the B2B data and analytics industry, which is a rapidly growing and largely untapped market. DNB’s proprietary Data Cloud encompasses a vast amount of information on businesses worldwide, giving it a competitive advantage over other market players. Additionally, DNB is deeply ingrained in customer workflows and its data is critical and non-discretionary, making it difficult for customers to switch to a different provider. Furthermore, DNB’s strategic alliances with organizations like the Worldwide Network allow it to serve both domestic and foreign businesses, further increasing its market reach. Overall, the market in which DNB competes is sizable and expanding, and DNB’s unique competitive advantages position it well to benefit from this growth.

DNB offers services related to data and analytics. DNB provides processes that are used in commercial credit decisions and other services.

B2B data and analytics is a big market

To better understand their data and make informed decisions, businesses are turning to B2B data and analytics providers. The widespread use of digital technology has made it clear to businesses that they must integrate data-driven insights into their daily operations to remain competitive. New methods of data collection and analysis are helping them boost output, lessen vulnerability, and expand revenue streams. Accurate and insightful B2B data is becoming increasingly important in many fields, including finance, credit, regulation, and marketing, and I expect this trend is likely to continue.

When it comes to data, the accumulation of data sets is rising because of the growing appreciation of data’s importance. In addition to an ever-increasing size, the breadth of information collected in today’s data sets is unprecedented. With the advent of more and more mobile phones and Internet-enabled gadgets, there is now a deluge of data that can be captured and tracked, fueling the global trend toward an IoT (Internet of Things). More nuanced and precise business insights can be gained by including this alternative data in predictive models in addition to more conventional forms of information gathering. While I agree that businesses now have access to a wealth of data, I also think they frequently need to rely on large-scale service providers to assist them garner insights.

DNB assists its customers in adjusting to ever-evolving market conditions. DNB’s TAM is sizable, expanding, and under-penetrated. DNB operates within the decision support and automation software market, which includes the broader big data and analytics software sector. This market is valued at approximately $90 billion, according to research firm IDC.

DNB is a leader in its field

When it comes to the data and analytics needed to make B2B credit decisions, I consider DNB to be a frontrunner. Having been in business for so long, DNB is in a prime position to meet the needs of its commercial clients in terms of data-driven decision-making thanks to the depth and breadth of its Data Cloud.

DNB Data Cloud encompasses hundreds of millions of businesses worldwide, far beyond the scope of publicly available information. In addition, DNB’s global database, WorldBase, contains information from around the world thanks to its strategic alliances with organizations like the Worldwide Network, which I see as a major competitive advantage in its ability to serve both domestic and foreign businesses. Importantly, DNB owns most of its data and receives most updates at no or low cost thanks to the collaborative nature of the Data Cloud. To me, this indicates the development of a powerful network effect, which provides an ever-increasing edge over existing and new players. In addition, DNB Data Cloud stands out from the competition thanks to its unique capability of tracking corporate linkages of child-to-parent organizations. This allows its customers to gain a deeper understanding of business relationships and to make more well-informed decisions based on a more complete picture of the company.

DNB, in my opinion, operates in a highly competitive industry, but it enjoys unique competitive advantages. The data that underpins DNB’s operations, such as credit decisioning and risk & compliance information, is critical and non-discretionary, giving the company a strong foundation. DNB also appears to be deeply ingrained in customer workflows, so switching to a different data provider would necessitate a major readjustment of the credit decisioning process and the loss of many data fields that are unique to DNB. I think DNB has a leg up on the competition thanks to the aforementioned data sources and the fact that it includes information on more than a hundred million businesses.

In my opinion, the new management at DNB has re-ignited the business catalysts for organic revenue growth, which should allow it to continue its mid-single-digit range and probably accelerate beyond. The majority of the past decade has been spent restructuring the company, with varying degrees of success due to efforts by previous management teams to speed up organic revenue growth. From 2010 until its take-private transaction in early 2019, DNB’s organic revenue growth averaged a very low-single digits growth. My opinion is that the legacy DNB’s slow organic revenue growth before the take-private was caused by outdated software solutions, a dearth of innovation in regards to underlying data and analytics, and an unaligned sales team reward system. In my opinion, the new management has taken measures to fix these problems, opening the door for DNB to better utilize and profit from its primary data assets in commercial credit and sales & marketing.

Despite the uncertain economic climate, I think DNB is making good progress toward organic revenue growth acceleration, as evidenced by their most recent earnings report (3Q22). DNB’s organic revenue growth accelerated to 3.9% and looks to be on track to hit 4% in the fourth quarter of this year. The current macroenvironment also contributes to this acceleration. Given that customers are looking to manage counterparty risks during times of elevated uncertainty, I believe DNB’s Finance & Risk business seems to be well to expand in the present macro climate. DNB’s efforts to improve the new product vitality index and introduce innovative products should also help boost organic revenue growth. This advancement to the mid-single digits is incredible, especially considering the legacy growth rate was close to zero.

I think DNB has an appealing business model because of its high degree of revenue visibility, reasonable operating leverage, and low capital needs. Due to the recurring nature of D&B’s subscription contracts, the company has a great deal of insight into its revenue streams. As DNB’s organic revenue growth accelerates, I anticipate that operating leverage generated by its build-once, sell-many business model will play a more material role in contributing to margin expansion. DNB also operates with a lean capital structure; the company’s annual capital expenditures are only a small fraction of its revenue.

Based on my thesis and DNB turnaround efforts, I believe a mid-single digits CAGR growth moving forward is achievable. With that, margin should expand as well. The key upside driver in my model is that I believe DNB will trade back to 12x EBITDA as it shows the market it can continue to grow, expand margin, and use the generated FCF to pay down debt.

If everything goes as planned, DNB should generate approximately $2.5 billion in revenue and $980 million in EBITDA in FY24. If we apply a 12x forward EBITDA multiple (about 2x higher than today), the share price in FY23 would be $19.18, representing a 38% increase.

The company’s turnaround story relies heavily on the expertise of its management team, so the potential departure of key executives is a concern. Lack of presence aside, poor execution of strategic initiatives may stall efforts to speed up growth and expand margins.

The market in which DNB operates is large and growing, and the company’s distinct advantages in this arena put it in a strong position to reap the benefits of this expansion. On top of this, the turnaround effects have been promising, and I believe the market will grow to appreciate it as management continues to execute.