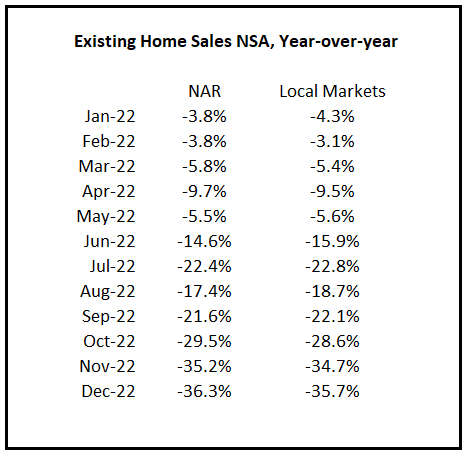 The big story for December existing home sales was the sharp year-over-year (YoY) decline in sales. Another key story was that new listings were down further YoY in December as many potential sellers are locked into their current home (low mortgage rate). And active inventory increased sharply YoY.

This is the final look at local markets in December. I’m tracking about 40 local housing markets in the US. Some of the 40 markets are states, and some are metropolitan areas. I update these tables throughout each month as additional data is released. 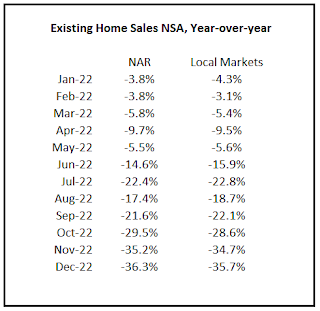 First, here is a table comparing the year-over-year Not Seasonally Adjusted (NSA) declines in sales this year from the National Association of Realtors® (NAR) with the local markets I track. So far, these measures have tracked closely. The NAR reported sales were down 36.3% NSA YoY in December.
…
More local data coming in February for activity in January!

My early expectation is we will see a somewhat smaller YoY sales decline in January, than in December, due to the decrease in mortgage rates in December (January sales are mostly for contracts signed in November and December).

There is much more in the article. You can subscribe at https://calculatedrisk.substack.com/