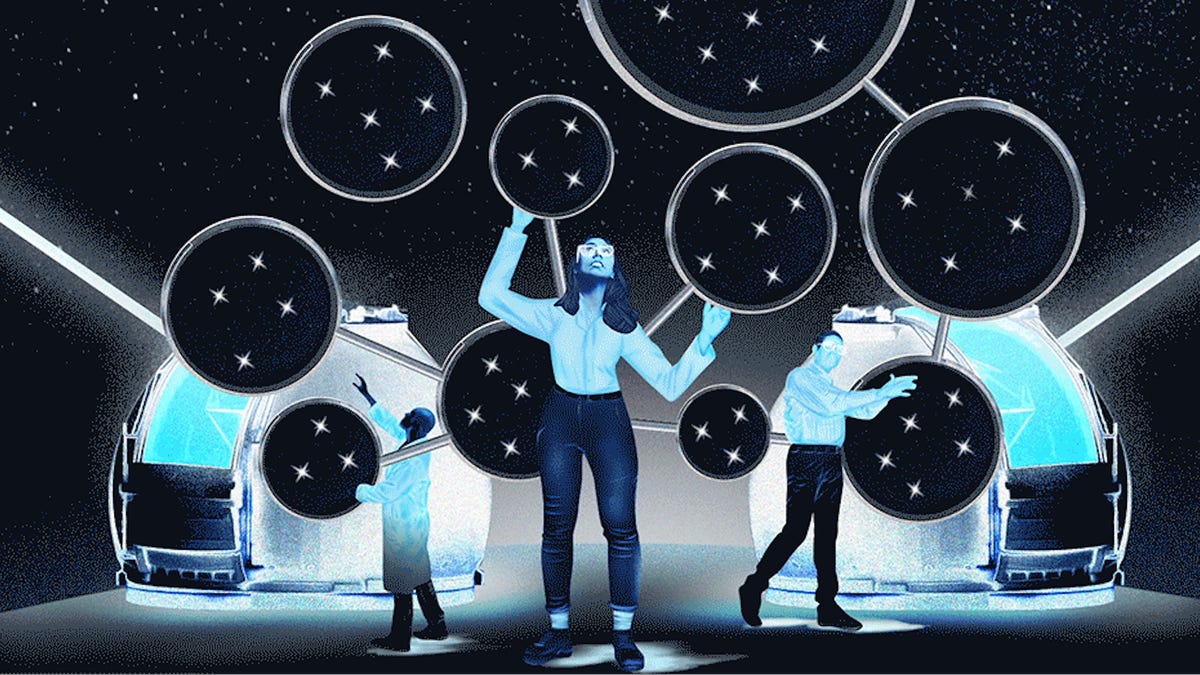 Toni Santana-Ros is an asteroid hunter.

At nightfall, after the day’s final scenes of flamingo sunbeams fade to black, he peers up at the sky to watch space rocks swimming along our solar system’s gravitational tides. Sometimes, he sees shards casually cruising next to Earth, greeting telescopes with a gentle “hey,” never to be observed again. But occasionally, he catches one on a crash course with our delicate blue orb.

Last year, Santana-Ros, a planetary scientist at the University of Alicante in Spain, sprang into action when astronomers realized an asteroid named 2022 WJ1 was headed straight for the border of Canada and the US. With barely four hours on the clock, he mustered his team to help pinpoint how menacing this asteroid would be. What towns would it threaten? Would it be like the dinosaur-killing Chicxulub or merely make a “plop” sound before sinking into a sturdy body of water?

“Luckily,” he concluded, “the object was small and just produced a spectacular fireball.”

But what if such a time-sensitive asteroid warning had been sent out in November 2020, when Santana-Ros’ telescopes were shut down because of bushfires ravaging the region and covering lenses with inky layers of ash? Or in February of 2021, when bushfire debris made its way into some telescopes, forcing astronomers to dismount instruments and pull blobs of soot from them after the wind settled?

Time and again, studies have shown that climate change is leading to an increase in wildfire occurrence and severity as the years go by. With our present greenhouse gas emission trajectory, some models even predict that the risk of very large wildfires in the US will increase sixfold by the middle of the century.

During his telescope shutdowns, Santana-Ros said, he’d received the interruption news while comfortably at home. “There was no big drama.”

But those blazes prevented his team from using telescopes for a few weeks.

“The bottom line here is that this time we were lucky and we missed just some regular observations,” he said. “Next time, we might be facing a real threat.”

Over the last few decades, climate change has altered our relationship with Earth.

Global industries still burn coal to make cheap power, diffuse dangerous fossil fuel waste into the atmosphere, force our planet to heat up, and ultimately fuel devastation like the wildfires responsible for the interruption of Santana-Ros’ research. Meanwhile, scientists are trying to learn how to shelter endangered animals left without homes because deforestation has ruined wildlife habitats, as well as how to deal with cyclones tearing apart coastal villages.

It’s almost like we aren’t part of our planet anymore, no longer blended into its environment like the oak trees and butterflies with which we share cosmic material. It’s as if we’re fighting to regain our rightful place as Earthlings.

With global warming ramping up, ground-based telescopes will find it harder to alert us about asteroids, show us glistening galaxies and deliver views of mysterious exoplanets populating the rest of eternity – wonders that unite us underneath our layers of disagreement, as evidenced by the ubiquitous love we witnessed for NASA’s James Webb Space Telescope two Christmases ago.

Cyclones, floods, fires and droughts are becoming the norm in astronomy hubs like Hawaii and New Mexico. Sites like the Les Makes Observatory were hit by severe storms at the same time Santana-Ros had to contend with wildfires near his tools in Australia.

And it’s not just full-on disasters that we have to worry about. It’s also the smaller things: changes in temperature, humidity, steady weather – elements telescopes usually rely on to operate in tip-top shape.

A recent paper, published last October in the journal Astronomy & Astrophysics, focuses on those crucial details while outlining an ominous future for astronomy. Its authors explore the specifics of what climate change could do to eight major optical telescopes scattered across the globe. Not just today, but by 2050.

“Our results show that climate change will negatively impact the quality of astronomical observations,” they say, “and is likely to increase time lost due to bad site conditions.”

Time lost, as in nights of stargazing compromised.

“My first reaction to the paper was ‘yikes’ – yet another depressing outcome of climate change,” said Clara Sousa-Silva, a quantum astrophysicist at Bard College. “I had not previously considered how it would affect future observations, but of course it makes perfect sense. Obviously, in the long list of tragedies that will come from a warming Earth, this is very far down the list of concerns, but it is nonetheless concerning.”

“Anecdotally,” she continued, though carefully noting the probability of confirmation bias, “observational colleagues have complained that there seem to be more and more nights lost to weather in recent years.”

Along with her advisors, Caroline Haslebacher, a doctoral student at the University of Bern in Switzerland and lead author of the recent study, realized no one had really looked into how climate change will affect astronomical observations, though Santana-Ros’ experience is evidence that damage is already being done.

They quickly moved to fill the gap.

The team modeled what would happen to those eight telescope subjects as the globe heats up, eventually suggesting we’ll see an increase in what’s known as specific humidity and precipitable water vapor in the coming years.

Essentially, this means the amount of water in the air will get higher because of climate change – a problematic situation because airborne water tends to absorb the same light telescopes are trying their hardest to catch.

“A lot of the most exciting astronomical observations are done at the very edge of instrumental capabilities,” Sousa-Silva said. “Any additional noise directly restricts the discoveries we can make.”

For instance, the study authors expect that on the extinct volcano of Mauna Kea in Hawaii, where many observatories lie, there’ll be an increase of 0.3 mm of water by the year 2050. Granted, such a miniature impact seemed quite soft when compared with other sites. “But still not zero,” John O’Meara, chief scientist at Mauna Kea’s Keck Observatory, said.

With this paper in mind, he’s particularly worried about increases in water vapor affecting not visible light but rather
infrared observations at the Hawaiian location. Such haze is very likely to pose problems for this category of light, which emanates from the distant universe.

Because wavelengths stretch out as they move farther and farther away from our planet, they get redder and redder and redder over time until they turn into elusive infrared patterns – invisible to human eyes but analyzable with advanced machines. This is precisely the form of light signals that scientists love, the kind that could reveal to us what the universe was like when it flicked on for the first time.

It’d be a shame for such a rich level of cosmic history to slowly fade away from our vantage point on Earth.

“Climate change effects were not historically included in site selection studies, and now we have a new variable to consider,” O’Meara said.

Because of this, Haslebacher believes that going forward, we should analyze trends when building telescopes.

“It is urgent for telescopes under construction,” she said, “since these canstill adapt their design for changing climate conditions, and telescopes in planning so that a minimally impacted site can be selected.”

But even that effort may not be enough to offset the barriers this crisis will create. More water vapor simply reduces light transmission in some spectral bands. Or as Sousa-Silva puts it, “we will literally have less to look at.”

Since the Industrial Revolution, it’s almost like humanity has existed in a dissonant thought loop regarding climate change – one that has, expectedly, turned into a political debate.

Last year, COP27 marked the 27th year that world leaders have met to discuss how to save Earth – and another year world scientists confirmed we’re pretty much failing.

“I have to emphasize at this point that we investigated the shared socioeconomic pathway scenario with the highest greenhouse gas emissions out of five possible pathways,” Haslebacher said of her paper. “Unfortunately, we are following this scenario today.”

In other words, the worst-case scenario is the scenario we’re currently living through.

Yet some policymakers and energy giants justify this kind of human rebellion against the natural world – and even encourage it – because fossil fuels give us inexpensive power. And without affordable energy, they worry, we’d need to dip into other financial budgets as penance for keeping our iPhone batteries a healthy green hue.

But to sustain fossil fuel-driven power, we pay in other ways.

“We know what we as a nation and a world need to do to avoid the worst effects, and yet we are largely unwilling to act at the scale that the situation demands,” O’Meara said. “I worry that it will take the first truly major catastrophe or conflict to wake us up, and by then, it may well be too late to avoid the next one.”

Further, the same pollution that’s heating up the globe is also bound to do things like thicken the atmosphere.

“An optically thick atmosphere is one in which radiation travels less,” said Luigi Vidale, a professor of Climate System Science and Climate Hazards at the University of Reading and co-author of the study. “Although [our] models considered the highest future emission scenario, we may still have underestimated the impact of airborne pollution on local visibility.”

To name a few more consequences: Global warming could degrade the overall atmospheric qualities of a telescope’s site, forming the right conditions for turbulence during observations. It could prevent scientists from cooling their machines down to the right checkpoints before embarking on a project – and, truth be told, concerns are deep enough to impact not just astronomy, but all science.

“It will change our whole world,” Santana-Ros said. “It is quite likely that climate change can be the source of future financial crises, which in turn will have a negative effect on research funding.”

Funding for science projects is already a huge conundrum – most of the time, only those who win grants, awards, scholarships and other such prizes are able to pursue their work for years on end.

So to add on to that, if we wait to act on climate change, and then something utterly drastic happens, we’d need to redirect resources from astronomy, medicine, chemistry, biology, botany and so on, into climate science.

“There is still time for science and industry to lead us to a better climate future,” O’Meara said. “All we need is the resolve and the investment.” It’s becoming clearer that without immediate action, the promise of ground-based telescopes might one day become a thing of the past – dying out alongside all the other beautiful things humans are tasked with protecting from the catastrophe they created.

At that point, the only link we’d have left to the stars would be our space-borne machines: the Webb Space Telescope, the Hubble – chunks of metal floating above a ravaged Earth, witnesses to humanity’s exit from the natural world.

“Plans for colonization of other planets are still sci-fi, and will still be for several decades,” Santana-Ros said. “Our only option to survive is to mitigate climate change.”