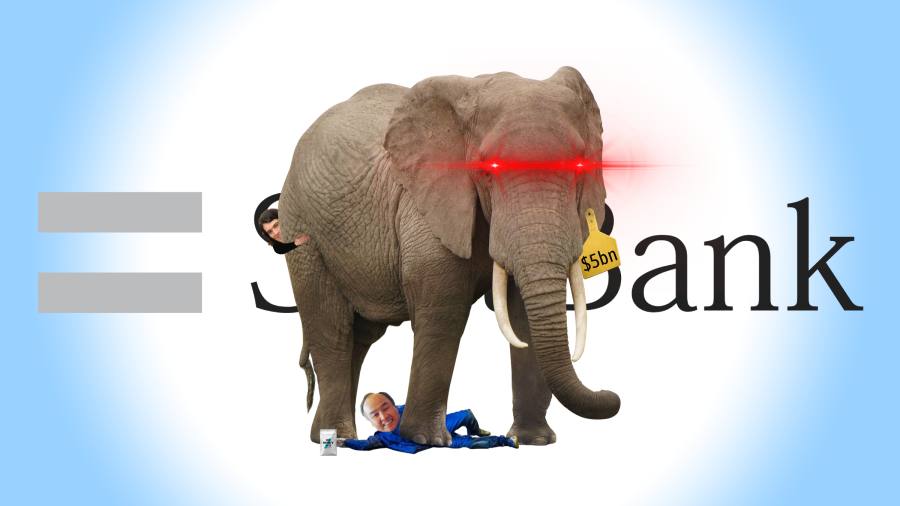 Picture the scene: one of the world’s biggest high-rollers steps into a casino with an urge to test his luck and skill at the poker table.

While the guy is a multibillion-dollar whale, he doesn’t have any cash on him and isn’t in the mood to go through the tedious process of rustling it up. So the casino’s pit boss decides to front him the money.

After all, he’s good for it. He made his reputation winning big on one of the shrewdest bets in history. If the card sharp has a hot streak and wins enough from the other players at the table, the casino can just deduct the debt from his winnings when it cashes out his chips. It would be almost as if the loan never existed.

Yet after a few hours playing high-stakes poker, the whale is down bad after a run of hands went against him. And suddenly, the floor manager who agreed the credit line faces a predicament over the unpaid tab.

Now imagine that the harpooned whale is also the casino’s top boss and biggest shareholder.

While you’re pondering the quandary facing our entirely hypothetical pit manager, here’s the latest on how things are going for Masa Son and SoftBank. From the FT last week:

Masayoshi Son personally owes SoftBank close to $5bn due to growing losses on the Japanese conglomerate’s technology bets, which have also rendered the value of his stake in the group’s second Vision Fund worthless.

The billionaire’s ballooning personal liabilities, discovered through a Financial Times analysis of SoftBank’s recent filings, comes as the world’s biggest tech investor was hammered by plunging tech stocks and valuations in private companies over the past year. […]

The widening losses in SoftBank’s various investment vehicles have also added billions of dollars to the tab that SoftBank’s founder owes the group in relation to its technology bets. This is because SoftBank fronted Son the money to invest in its technology-related funds, which he is under no obligation to repay for many years.

It’s worth noting that Masa’s IOU is well over $5bn on a gross basis, but the net figure comes in lower because SoftBank deducts cash he has already deposited (seems fair) as well as the remaining equity value in one of the funds (a bit more 🤔).

There’s a lot to pick through in the arrangement, so let’s start with Vision Fund 2.

While the first $100bn (well, almost) Vision Fund drew tens of billions of capital from Gulf sovereign-wealth funds, its $56bn younger sister has no outside investors. This is largely because its initial fundraising drive coincided with WeWork’s aborted IPO debacle in 2019, which made typically free-spending sheikhs and princes a little more circumspect about opening their cheque books.

Armed only with cash from SoftBank and its founder Masa, Vision Fund 2 seemingly entered into a Brewster’s Millions-style contest with Tiger Global to see who could plough the most money into the biggest number of start-ups in the shortest amount of time.

A furious pace of investment means Vision Fund 2 has invested in nearly three times as many companies as its predecessor, bestowing its capital upon 274 “global AI innovators working to transform industries and shape new ones”, versus just 94 in the not-famously-cautious original Vision Fund.

As of the end of September, the results of this careful allocation of capital have been as follows:

The fact that Vision Fund 2 is nearly 14 yards in the hole also means that Masa Son has taken a hit, through his 17.25 per cent stake in the investment vehicle:

The fact that SoftBank fronted Masa’s equity cheque in the fund is not intuitive from that chart. Here’s an extract from the disclosure given at SoftBank’s AGM earlier this year, with our emphasis:

Note that while SoftBank is effectively charging 3 per cent annual interest, this is not being paid in cash and is accruing against the balance owed. Masa in effect got cheap payment-in-kind leverage from SoftBank to fund his investment in Vision Fund 2.

There’s another form of leverage embedded in the structure: Masa only holds common equity in the fund while SoftBank has a big slug of preference shares. This means he picked up a 17.25 per cent share of a circa $50bn fund with just $2.6bn of equity committed, per the table below:

The problem with leverage, however, is that it magnifies losses as well as gains.

Because SoftBank’s chunk of pref ranks ahead of Masa’s sliver of equity, the value of his stake has been wiped out as the dizzying valuations of private tech companies crashed back to earth. From sitting on nearly $2.8bn of value at the end of 2021, Masa’s share of Vision Fund 2 was a total doughnut by the end of September this year.

And because SoftBank nets off Masa’s equity value from the size of his unpaid tab, his outstanding receivable has ballooned in lock step with his equity stake’s slide to zero:

The whole arrangement in mirrored in miniature in SoftBank’s $7.6bn Latin America Funds. These were set up in 2019 as a shiny new toy for now-departed executive Marcelo Claure, to help “builders and innovators in Latin America develop enduring businesses that will create greater opportunity for the entire region”.

Masa still has some equity value in the LatAm funds so his net liability there is a mere $252mn:

So far, Masa has racked up a $3bn+ liability to SoftBank across two funds.

It is theoretically possible, however, that their investments will rebound and get Masa back in the black. Sure, Vision Fund 2 may have sent $100mn straight to money heaven on FTX, but who knows — maybe its investments in other crypto disrupters such as Digital Currency Group will prove to be more successful.

But the possibility of making it all back does not exist with SB Northstar, SoftBank’s shortlived internal hedge fund, which is in liquidation and has already crystallised billions of dollars in losses.

SoftBank set up Northstar in 2020 having made a well-timed bet on US tech stocks such as Amazon and Microsoft during their Covid dip. The new unit not only formalised SoftBank’s newfound penchant for stock trading, it handed its chief a piece of the action: Masa would share in any potential future gains through a 33.3 per cent stake in Northstar.

Clever structuring on that trade had shielded SoftBank execs from losing their original investment even after Wirecard collapsed. But Northstar’s grand strategy of YOLO’ing call options on US tech stocks — the now-infamous “Nasdaq whale” trades — quickly incinerated billions of dollars.

Northstar also proved to be a poor stock picker, losing big on stocks such as THG. SoftBank decided to shelve its foray into trading at the end of 2021 and has spent this year running down its remaining positions.

The supernova at Northstar leaves Masa sharing in its epic losses rather than any gains. Here’s how things stood at the end of March:

Its total investment loss has since climbed to around $6bn at the end of September. The amount Masa owes SoftBank in relation to the mess, once cash he has already deposited and currency effects are taken into account, stands at around $1.6bn. (Figures below in Yen as of September 30):

While Masa’s net liability to SoftBank clocks in at a whopping $4.7bn across the three funds, he is not exactly under time pressure to pay up, having until the end of the funds’ lives to make good losses. In the case of Northstar, this could take a decade:

If, at the end of the fund life (12 years + 2-year extension), SB Northstar has any unfunded repayment obligations to SBG, Masayoshi Son will pay his pro rata share of any such unfunded obligations based upon his relative ownership percentage of SB Northstar.

How has SoftBank protected itself against the risk that its chief executive is not able to make good on the money?

Before we get into the nitty-gritty of its collateral, it is worth explaining the concept of wrong-way risk. This is a phenomenon where your exposure to a counterparty increases as the counterparty’s default risk rises. An illustrative example, courtesy of our friends at Risk.net, would be an arrangement where a “counterparty posts its own bonds — or bonds of closely linked entities — as collateral”.

With that in mind, we present to you the Sistine Chapel of wrong-way risk:

As security for the unpaid amount, Equity interests in SVF2 LLC held by MgmtCo will be pledged as collateral for the unpaid obligations of the investment owed by MgmtCo. Masayoshi Son will also provide a personal guarantee of MgmtCo’s outstanding debt up to the amount of the outstanding debt. In addition, Masayoshi Son will deposit with SVF2 LLC $500 million worth of SoftBank Group Corp. shares (as of the issue date of the Equity from SVF2 LLC to MgmtCo).

To summarise, SoftBank is extending credit to its CEO to invest in a fund it manages. The loan is secured on a) his equity in the fund b) a bunch of SoftBank shares and c) his personal wealth. Just try to wrap your head around what would happen in a scenario where massive investment losses at SoftBank trigger a share price slide that wipes out most of Masa’s net worth.

This arrangement exists on both Vision Fund 2 and the LatAm Funds (with a smaller amount of stock pledged on the latter). And Masa is no stranger to pledging his SoftBank stock: Japanese securities filings showing that over half the shares he holds directly are held by various financial institutions as collateral (we’ve highlighted the two funds):

At least there’s some extra protection though. In the case of Northstar, SoftBank relies solely on a guarantee from Masa and his Son Assets Management entity, with no additional collateral. (SoftBank disclosed earlier this year that Masa was “deemed to have sufficient holdings” to indemnify the losses. Phew!)

That Masa has racked up this nearly $5bn unpaid tab also brings a new dimension to an often discussed peril of investing in SoftBank: key-man risk.

The question of how SoftBank would function without its 65-year old founder and CEO has loomed larger and larger over the past decade. Successive heir-apparents — from Nikesh Arora to Rajeev Misra — have exited the group.

(Incidentally, the issue manifested itself less hypothetically with Misra’s exit, where the existence of a key-man clause on the first Vision Fund has led to the bizarre situation where he has retained his role as an executive at the fund’s manager SB Investment Advisers while otherwise leaving SoftBank.)

The problem of trying to envisage SoftBank After Masa becomes even thornier now he owes his company billions. The outstanding receivable has, quite literally, transformed SoftBank’s chief from an asset into a liability.

Masa earlier this month announced that he was stepping back from running day-to-day operations at SoftBank to “devote” himself to overseeing British chip designer ARM. The sober announcement saw SoftBank jettison its trademark wacky slides, with nary a flying unicorn or duck/rabbit optical illusion in sight.

It is a shame because FT Alphaville can think of a good slide it could illustrate its present predicament: the $4.7bn elephant in the room.