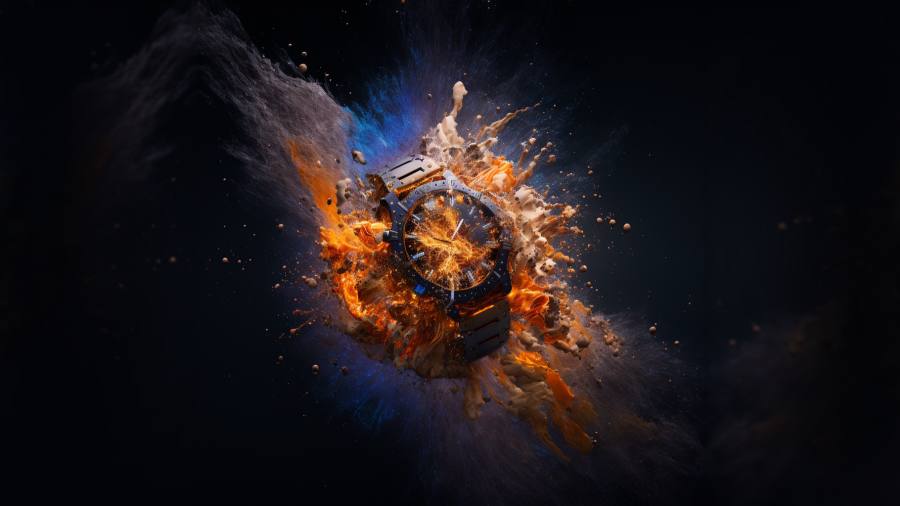 Watches are great. As a way to tell the time, the wristwatch is certainly among the top five options to consider.

Watches can be less useful as stores of value:

The above is from WatchCharts, a website that tracks the resale value of high-end wristweights. Over the past 12 months to mid January, among the 49 brands it follows, Rolex was the worst performer, with the average listing price down 15 per cent. Tudor, Rolex’s junior brand, is the second biggest loser with a fall of 11.5 per cent.

It could be worse. A 28 per cent peak-to-now drop in resale value means expensive watches have outperformed bitcoin over the same period (-51.9 per cent), as well as the Ark Innovation ETF (-44.5 per cent). But performance looks less resilient when compared against the S&P 500 (-12 per cent), spot gold (-1 per cent) and US treasuries (-4.9 per cent).

There are lots of reasons for why watch prices are falling faster than luxury spending in general. It’s partly China, where high-end pawn shops did brisk business last year as Covid lockdowns forced HNWIs to raise cash. It’s also the disappearance of crypto froth, which benefited the most obvious brands as coinbros offered multiples of RRP to turn their tokens into something tenable. There’s also a bit of distortion stemming from Rolex’s launch in December of an official resale channel. (Rolex official certification is worth a 39 per cent premium, WatchCharts finds.)

Double-digit deflation might nevertheless surprise casual readers of the watch media. Recent stories on our own pages have been about demand for wristwear continuing to outstrip supply, resulting in all sorts of weird stuff in the primary, secondary and even tertiary markets.

Making sense of it all means understanding Rolex. The brand is estimated to account for 42 per cent of the global luxe used watch sales by value, according to Morgan Stanley research. Patek Philippe and Audemars Piguet are in a distant second and third place respectively, with a combined 28 per cent of the used market by value.

All three companies are privately owned and secretive by default, but a reasonable estimate is that between them the latter two turn out about 100,000 watches a year. Rolex is in a different league. It’s estimated to add at least a million to supply annually and is reportedly breaking ground on a new factory. There’s no sign of the reported supply shortages on specialist resale retailer Chrono24, where nearly one in five listings is for a Rolex.

China is therefore worth watching because among big watch markets it’s where the Rolex distortion is at its weakest. Omega and Longines, both owned by The Swatch Group, are China’s top selling luxe brands and, until recently, the most coveted name was Patek Philippe.

Another reason to care is because Chinese watch sales have been spectacularly bad.

Full-year results this week from Swatch missed expectations in spite of its MoonSwatch selling more than a million units. The MoonSwatch is a dual-branded replica of an Omega Speedmaster that’s sold exclusively through Swatch shops for about a 100th of the price of the real thing. It has proved wildly popular.

Yet China still managed to eclipse the MoonSwatch. Greater China sales dropped 50 per cent year-on-year in December. Group 2022 constant FX sales growth would have been 25 per cent without China, instead of the 4.6 per cent reported. Cash flows deteriorated sharply and inventories hit a record as stockpiled parts and materials were left unused.

Swatch CEO Nick Hayek said on the earnings call that Chinese demand is rebounding but that there were too many Longines and Omegas in the supply chain. These kind of overstocks are difficult for high-end watchmakers to manage.

Rolex last year denied choking supply but among its peers, scarcity has to be manufactured. Deloitte’s 2022 Swiss Watch Industry Study found that nearly 30 per cent of brands were discontinuing products to keep them exclusive. Patek Philippe last year withdrew its runaway best seller, causing secondary prices to spike, then reintroduced it at twice the price.

Swatch’s strategy has been protect its all-important Omega brand by pushing precious metal variations while bypassing the counterfeiters with its own official knock-offs. Offsetting of avarice against novelty has been a winning strategy but probably can’t be repeated too often, and it hasn’t stopped Omega resale values falling 7 per cent in a year.

Another grim reading on China came this week from The Swiss Watch Fed, Fédération de L’Industrie Horlogère Suisse. Its report for December showed month-on-month export growth decelerating nearly everywhere, but Greater China and Hong Kong were notably awful: down 22.6 per cent and 19.8 per cent year-on-year respectively.

Supply chain stuff has an outsized effect on monthly data so trends are clearer on a three-year view. The chart below from JPMorgan shows that while Europe and the US imports have been steady against pre-pandemic levels, China flipped has negative for a second time in a year:

The other way to split the data is by price. The Swiss export federation’s top band starts at Sfr3,000, which in retail terms is a Cartier or a Breitling. The range below cuts off at Sfr500, equivalent to a Tag Heuer or a Rado. Then there’s the lower band between Sfr200 to Sfr500, which is Tissot territory. For some time their respective performances have been good, bad, and awful.

By value, Swiss top-price exports grew 13.3 per cent last month after 15.7 per cent gain in November. In the mid-band, exports plunged 14.3 per cent having been flat in November. But it’s the lower band where the battery has leaked, with sales by value down 25.7 per cent after a 30.3 per cent drop in November. Chart below from Morgan Stanley:

All of which continues a trend visible since 2017: watch exports by value have kept going up even as volumes went down. RBC Capital Markets provides the average selling price chart:

2017 lives large in horologists’ collective memory because it was when Paul Newman’s Rolex Daytona sold at auction for $17.8mn. It was a Beeple moment, helping solidify the belief that expensive watches are appreciating assets with bonus tax breaks and easy cross-border transportability. The Apple Watch had arrived a couple of years earlier to knock the already struggling mass market, so the industry pivoted as one into big-ticket collectibles for the newly wealthy.

Does China hint at a strategy at its limits? Though reopening chaos and historic volatility make conclusions difficult, the depth of downturn still looks ominous. China’s primary watch markets reopened in December but the status seekers and resale flippers just didn’t turn up.

The world looks different outside China largely because of Rolex, whose second-hand certified models still tend to sell at a premium to retail. But the Rolex bubble has deflated as fast as it grew and peers have shown few tricks beyond chasing ever higher price points.

If last year’s secondary market correction morphs into a China-led, industry-wide cyclical downturn it could yet have implications for the value of whatever’s on your wrist. Unless it’s just for telling the time, in which case no worries.