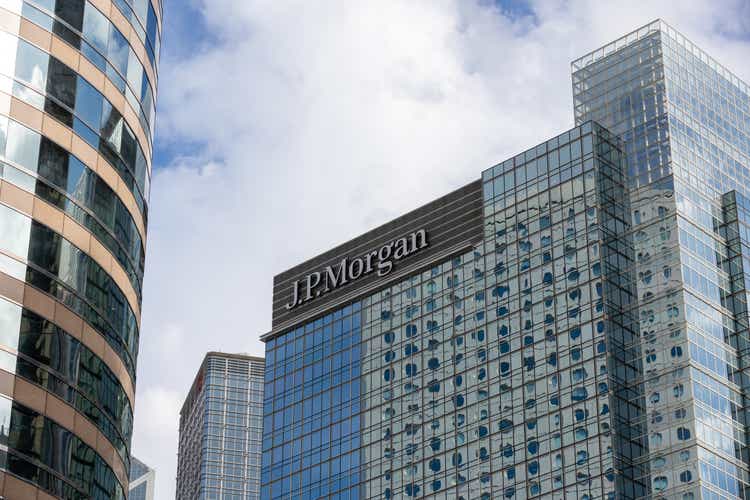 The Street has gotten much more concerned about funding costs and credit quality with banks in recent months, and that seems to be benefitting JPMorgan (NYSE:JPM). While JPMorgan isn’t immune to deposit/funding cost pressures, nor worsening credit quality, this top-tier bank is relatively well-positioned compared to its peers and concerns about operating leverage and capital requirements are starting to fade.

JPMorgan shares are up almost 20% since my last update, leading the way among the large banks that could reasonably be considered peers. With that outperformance, and the risk that net interest income could reach a peak in the next quarter or two, it’s harder to argue for JPMorgan’s near-term outperformance potential, but I do still see a worthwhile longer-term total return opportunity here. What’s more, if the economy weakens even more than I expect and sees a hard/harder landing scenario play out, I believe JPMorgan will fare better than most.

Funding Costs Are Accelerating, But JPMorgan Has Options

A key part of my thesis on banks this year has been that as the Fed started to move on rates, deposit costs would not only rise, but rise at a faster rate than many analysts and banks expected. That’s playing out now, with CD deposit betas have recently topped the high of the prior cycle (using the highest advertised CD rates), and most banks reporting higher-than-expected deposit cost increases in the third quarter.

For JPMorgan’s part, the 49bp yoy and 37bp qoq increase in deposit costs and 56bp qoq increase in total funding cost place them on the higher side of average, but not egregiously so, and certainly not in comparison to Bank of America (BAC) or Citigroup (C) (with JPM close to 1%, BAC close to 0.9%, and Citi close to 1.45%). Even so, JPMorgan’s cumulative deposit beta (the rate at which deposit costs rise relative to underlying rates) is on the high side now, and that’s a concern.

JPMorgan has done a good job of deposit-gathering in recent years, with the company gaining market share in top metro areas, largely through a program of new branch openings and active efforts to drive growth in its digital banking business. Still, I don’t expect organic growth to be enough through this phase of the cycle – JPMorgan had the second-best performance of large banks in terms of non-interest-bearing deposit retention (second to Truist (TFC)), but the bank still saw a 3.6% qoq decline.

On a more positive note, the bank still has securities balances that it can harvest, and the operations generate meaningful cash. All told, between better retention of no-cost and low-cost deposits and more flexibility with low-cost sources of funding, JPMorgan should be one of the better-placed large banks and shouldn’t have to rely as much on higher-cost sources of funding like CDs.

Flexibility Will Be An Asset

I believe that JPMorgan is heading into 2023 with decent flexibility on key drivers. The bank surprised the Street earlier this year with much higher spending guidance as management chose to continue investing aggressively in business and IT development. More recently, management has started backing off a bit, signaling some willingness to be more flexible on spending (including a quote at the November Boston Bank Conference talking about how “only so many doctors can work on a patient at once”).

Management is also moving towards more flexibility on capital. As I expected, the company has moved quickly to reduce risk-weighted assets (or RWAs), with another $25B reduction in Q3’22 after a $40B cut in Q2’22. At this pace, buybacks could resume sooner than previously expected, with management talking about a potential resumption in the first half of 2023.

I also see room for flexibility on credit and provisioning/reserves. So far, JPMorgan’s credit quality has remained excellent, but trends for the banking sector as a whole are starting to move in a worse direction, with credit card delinquencies in particular starting to normalize. At this point, JPMorgan’s reserve ratio is still comfortably below CECL Day 1 (1.7% in Q3 versus 1.9% Day 1), and I find it interesting that management is talking more about a worsening outlook for 2023, but not increasing reserves more aggressively.

I expect that Bank of America and Wells Fargo (WFC) will see better overall loan growth in 2023, but JPMorgan could still surprise to the good, and the bank has been gaining more share in retail and middle-market banking than commonly appreciated. I also believe there may be some underestimation of the valuation of the business investments that JPMorgan is making in areas like payments and treasury services, but that likely won’t show in the financials for a few years.

I do have a weaker outlook for 2023 now (for banks in general, not just JPMorgan), and I do believe that net interest income could see a peak for this cycle in the next two quarters, particularly with JPMorgan management warning analysts not to extrapolate 2023 net interest income from upcoming Q4’22 results. As mentioned above, I do also still see elevated risk on the funding side (again, for all banks), but I think JPMorgan is better-placed than many peers and could have a little more flexibility on costs/operating leverage than previously believed. I think the realization of that added flexibility may well be what has helped the stock outperform more recently.

Net net, not all that much changes in my model, though. My 2022 core earnings estimate is higher, my 2023 and 2024 estimates are a bit lower (about 1% and 3%, respectively), but I’m still looking for around 4% core earnings growth over the next five and 10 years, and I still expect JPMorgan to be a net share gainer in retail banking, cards, middle-market banking, and corporate payments.

On a discounted core earnings basis, I believe JPMorgan is modestly undervalued and still capable of generating a double-digit annualized return. Looking at shorter-term valuation approaches (namely ROTCE-driven P/TBV and P/E), I see the shares as more or less fairly-valued.

I believe there are still arguments for giving JPMorgan a place in a long-term portfolio; I believe it is one of the best-run banks out there, and the valuation is still reasonable. I do think, though, that there are cheaper names with more near-term upside, and that list includes Bank of America and Truist. On the other hand, if the economy worsens more than I expect, I believe JPMorgan will hold up better than most other names.

For investors who are less inclined to trade in and out of stocks, time the markets, and make big direction bets on the economy, I think JPMorgan is still a good “sleep well at night” option, even if it isn’t likely the best choice now for six-month or 12-month outperformance.