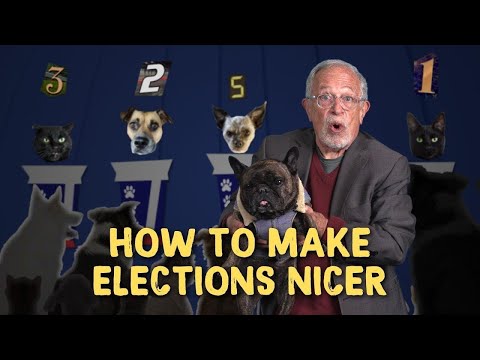 The One Thing That Would Make Elections Better For Everyone

Are you sick of the onslaught of negative political ads that air on your TV every election season?

The fear-mongering. The half-truths.

Believe it or not, there’s a simple reform we can enact to make elections more bearable for voters.

It’s called ranked choice voting, or RCV, and it could change our politics for the better.

When you head to the ballot box under ranked choice voting, instead of voting for just one candidate, you have the option to rank candidates in order of preference: first, second, third and so on.

So if you’re stuck between two preferred candidates for a position, you can spread your preferences out in hopes that one of them wins.

When ballots are counted, if none of the candidates gets an outright majority, the candidate with the fewest votes is eliminated, and their votes are redistributed to their supporters’ second choice candidate.

This process continues until a candidate receives over 50% of the vote, and is declared the winner.

It’s also good for a whole host of other reasons.

Implementing RCV could have the added benefit of making our elections… well… nicer.

In a ranked choice voting system, candidates are less likely to engage in the kind of mudslinging we see every election season, because they’re not just trying to be a voter’s first choice — they also want to be the second choice of voters who are backing their opponents.

This can motivate anyone running for office to be more inclusive and appeal to a broader range of voters — helping to connect people who don’t always agree on every issue.

Even if your favorite candidate from your preferred party is not favored to win, that person could still be your first-choice — without you feeling like you are giving up your vote entirely. If your candidate doesn’t make it to the final round, your second or third choice could still end up winning in the final tally.

Ranked choice voting can even change the kinds of people who run for office — for the better. Potential candidates wouldn’t have to avoid running for fear of splitting the vote or “spoiling” a close election — allowing for a potentially more diverse pool of candidates to run.

Look at Alaska, where voters used RCV to elect Mary Peltola to Congress — making her the first Alaskan Native and first woman to represent the state in the U.S. House.

Lastly, ranked choice voting saves everyone — you, me, elections officials — time and money.

There would no longer be runoffs, which can be costly and often have lower turnout — which means election results that are less likely to reflect the will of the public.

There’s a reason why RCV is starting to sweep the nation — it’s currently being used by 13 million voters across the country.

Maybe you can organize to make ranked choice voting a reality where you live.