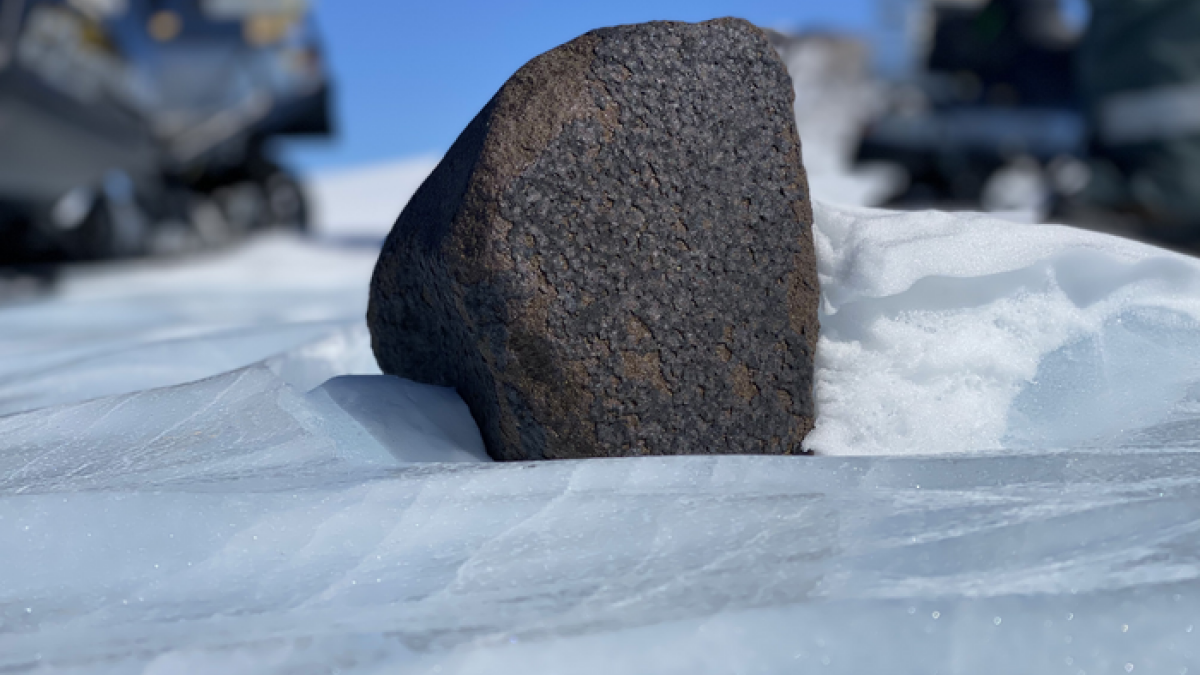 Lately, research scientist Maria Valdes has had to remind folks that size doesn’t matter, but she understands why the public is enthralled by her team’s new space discovery.

On an Antarctic expedition in late December, she and three other scientists stumbled upon a 17-pound meteorite, heavier than most bowling balls and Halloween pumpkins. Only about one out of every 450 or so meteorites found on the frigid continent are this size or larger, according to an announcement by the Field Museum in Chicago where Valdes works.

Meteorites typically range between the size of a pebble and a fist, according to NASA.

“Even tiny micrometeorites can be incredibly scientifically valuable,” Valdes said in a statement(Opens in a new window), “but of course, finding a big meteorite like this one is rare, and really exciting.”

A meteorite punched a hole in a dog house. Now it’s a collector’s item.

Scientists estimate about 48.5 tons of billions-of-years-old meteor material(Opens in a new window) rain down on the planet daily, much of which vaporizes in Earth’s atmosphere or falls into the ocean, which covers over 70 percent of the planet.

“Finding a big meteorite like this one is rare, and really exciting.”

The majority of space rocks are found in Antarctica because they’re relatively easier to spot on the vast frozen plains. The dark lumps stand out against the snowy-white landscape, and even when meteorites sink into the ice, the glaciers churning beneath help to resurface the rocks on blue ice fields. But the conditions for explorers can be brutal(Opens in a new window). The team spent days riding snowmobiles and trudging through ice, only to retreat into tents for the night. At least the trips weren’t directionless, though: For the first time, this Antarctic meteorite-hunting team used satellite images(Opens in a new window) as a treasure map to help identify potential new space rock sites.

Meteorites are divided into three main categories(Opens in a new window): the “irons,” the “stonys,” and the “stony-irons.” Most meteorites that fall to Earth are stony, though the space rubble that scientists find long after landing are generally irons: they’re heavier and easier to distinguish from everyday terrestrial rocks.

Ryoga Maeda, one of the researchers, said the rock likely came from the main asteroid belt and crashed into Antarctica tens of thousands of years ago. He called it an “ordinary chondrite,” according to an announcement from the Vrije Universiteit Brussel(Opens in a new window), meaning it’s thought to be among the most common form of stony meteorite. The meteorite will be studied at the Royal Belgian Institute of Natural Sciences.
Credit: Maria Valdes / Field Museum

Scientists will need to analyze the big rock, as well as four others found on the trip, in a lab before anything conclusive can be said about its type or origin. The Royal Belgian Institute of Natural Sciences will perform the studies.

The individual researchers also will take back sediment samples to their home institutions to see if they contain tiny meteorite debris.