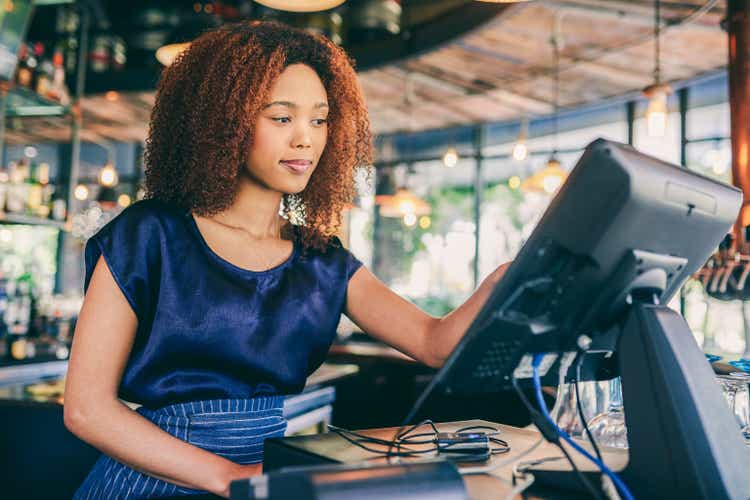 Shift4 Payments, Inc. (NYSE:FOUR) provides leading integrated payment processing and technology solutions in the US. In fact, on July 2022, the company has already hit $1 billion in weekly end-to-end processing volume. Furthermore, it has effectively expanded its international footprint and now serves over 45 countries and has over 500 software integrations in different industries.

FOUR still has one major acquisition pending of Finaro in hopes to strengthen its European operation and its global operation, positioning the company towards its growing addressable market of over $3.5 Trillion. On top of this, FOUR successfully acquired The Giving Block, a crypto donation marketplace, on February of this year. Because of this, it will be positioned to take advantage of cross-selling opportunities in the nonprofit sector. According to management, these two meaningful transactions alone will provide Shift4 with an incremental $35 million in adjusted EBITDA in 2023.

With these catalysts in place and a bullish forecast from management for FY ’22, FOUR remains appealing in today’s bearish market, making it a compelling buy candidate.

FOUR ended the quarter with a strong 44.87% year-on-year increase in total revenue to $547.3 million. This is thanks to its effective expansions this year such as Online Payments Group and Restaurant Technology Partners. On top of this, FOUR has major organic initiatives, as quoted below.

A great example is Canada and the Caribbean where we have existing gateway volume and restaurant customers using our POS software that we can quickly cross-sell, while primarily serving the needs of our strategic merchant relationship. So, to be clear, we are laser focused on using our low-cost capital to seek out payment capabilities throughout the world. Source: Q3 ’22 Earnings Call Transcript

This helped the company achieve its growing trailing End-to-End payment volume worth $64.29 billion, up 37% from its $46.7 billion recorded in FY ’21. This growth figure is quite good and given the management’s forecast for FY ’24 to exceed $160 billion in end-to-end payment volume, FOUR becomes even more appealing.

Additionally, FOUR enhanced its competitive advantage in the restaurant industry with its newly launched SkyTab POS system, the company’s game changer restaurant POS. This will help further its payment-based recurring revenue and according to management, the company has already identified over 100,000 restaurants ready to be converted with SkyTab.

Despite the numerous acquisitions, FOUR manages to maintain its growing gross margin, as demonstrated in the image below.

With its expanding software integration and cross-selling opportunities, it is not surprising that FOUR’s profitability is improving.

Our quarterly volume growth is 349% of pre-pandemic levels, along with gross revenue less network fees at 246% and adjusted EBITDA at 349% over the same period. Our spreads remain stable across all high-growth core verticals, including restaurants and lodging despite our continued mix shift upmarket. Source: Q3 ’22 Earnings Call Transcript

In addition to acquisitions, FOUR buys back its own stock and as of this writing, the company has bought $184.4 million in stock at an average price of $47.40 per share. In addition, it still has a remaining $44.5 million in outstanding buyback program authorization. This will eliminate the potential of further dilution.

Looking at the comparison above, we can easily distinguish that FOUR is trading relatively above its peers’ average, especially considering its forward P/E of 61.60x and forward EV/EBITDA of 14.27x, compared to its peers’ median of 46.87x and 9.87x, respectively. However, this premium is accompanied by higher-than-average revenue growth of 46.28% over the next full year, against its peers’ average of 3.47%. Additionally, based on its trailing Non-GAAP P/E of 48.57x and analyst expectations, FOUR’s value will improve significantly.

The company provides an attractive valuation as of this writing, with an upside potential of 35% compared to my average fair value of $62. This figure is derived from an estimated EPS of $1.38 and EBITDA mounting to $278 million in FY ’22 and an implied P/E multiple of 46.87x and an EV/EBITDA multiple of 9.87x.

Looking at its bottom line, FOUR actually grew to $43.1 million, up sequentially and in its comparative quarter last year. However, this comes from non-recurring $36.9 million adjustment on its contingent liability related to its The Giving Block acquisition. The change, according to management, is due to an unfavorable drop in projected income throughout the earnout period. In fact, the company ended the quarter with normalized net income amounting to $5.5 million, down from its $6.1 million recorded in Q2 ’22. On top of this, its operating margin of 3.64% this quarter is actually below its 4.76% recorded in Q2 ’22 but remains strong over its -1.03% recorded in Q3 ’21. This decline, according to management, is derived from higher compensation. This makes FOUR vulnerable to the short-term effects of a future global recession.

Shift4 Payments remain liquid, with no material long-term debt due until 2025. Despite the temporary weakness mentioned, this stock has an appealing long-term growth opportunity, making it an attractive buy as of this writing.

Thank you for reading and good luck to us all!