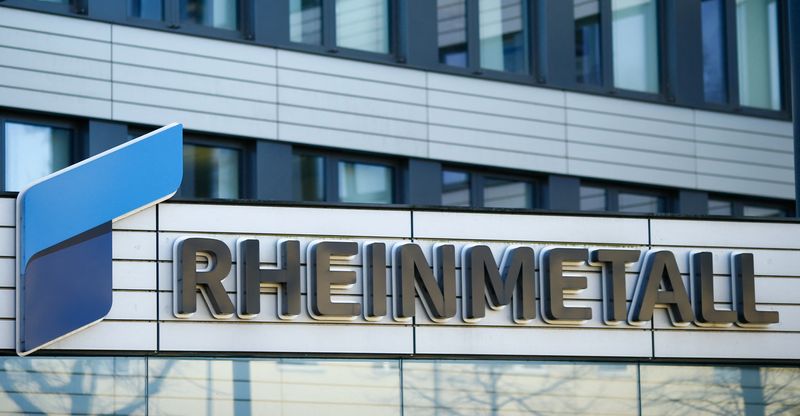 By Anneli Palmen and Christoph Steitz

DUESSELDORF/FRANKFURT (Reuters) – German defence group Rheinmetall on Tuesday raised its sales expectations for 2025 on higher demand for weapons due to the war in Ukraine and called on Berlin to speed up planned big orders and make good on a pledge to boost its armed forces.

The comments by Rheinmetall CEO Armin Papperger come as Germany has earmarked 100 billion euros ($109 billion) to bring its military back up to scratch after decades of attrition since the end of the Cold War.

They also come as Germany comes under pressure to step up defence supplies to Ukraine, including Leopard tanks manufactured by Rheinmetall together with Krauss-Maffei Wegmann.

“The entire German industry is ready. The resources are there, the people are there, we also have the know-how,” Papperger said at an industry event hosted by German business daily Handelsblatt.

He said what was needed now was close coordination with the German government so defence companies such as Rheinmetall, which spent 700 million euros in capacity expansion and hired 2,000 new staff last year, have planning security.

Rheinmetall has so far supplied Ukraine with air defence systems, which are also used to combat drones, along with various types of ammunition, military trucks and a field hospital, Papperger told the magazine.

He added that the group had also sold Leopard tanks and Marder infantry fighting vehicles as well as trucks as part of a swap system whereby countries that still have Soviet equipment hand it over to Ukraine and Germany backfills with more modern Western equipment.

Papperger said that while the company was in theory able to produce more artillery ammunition than the United States, it has “not received a single order”.

Germany has so far resisted pressure from Ukraine and some NATO allies, such as Poland, to allow Kyiv to be supplied with German-made Leopard 2 tanks to defend itself against Russia.

The Leopard 2 battle tank is armed with Rheinmetall’s 120mm smoothbore gun and the company also supplies ammunition, fire control technology and C4I systems for it.

A company spokesperson told media group RND that it could deliver 139 Leopard tanks to Ukraine if needed.

Rheinmetall could send 29 Leopard 2A4 tanks by April/May and a further 22 around the end of this year or early 2024, the spokesperson was quoted as saying.

It could also supply 88 older Leopard 1 tanks, the spokesperson said, without giving a timeframe for potential delivery.

Asked how much the company earns from Leopard 2 battle tanks, he said Rheinmetall was targeting a profit margin before tax of at least 10%.

“We’re working for national and European security – and that includes fair prices,” the 59-year-old Papperger said.

However most of those plans, hailed at the time as a new era of more assertive German foreign policy backed by military spending, are still unclear.

UBS last week downgraded Rheinmetall to “neutral” from “buy”. It said positives, including mid-term defence spending, had been priced into the stock.

Its shares have risen 170% in the past year.

Further upside depends on the order flow from the government’s spending plans, which is not yet reflected in Rheinmetall’s order log, the bank said.