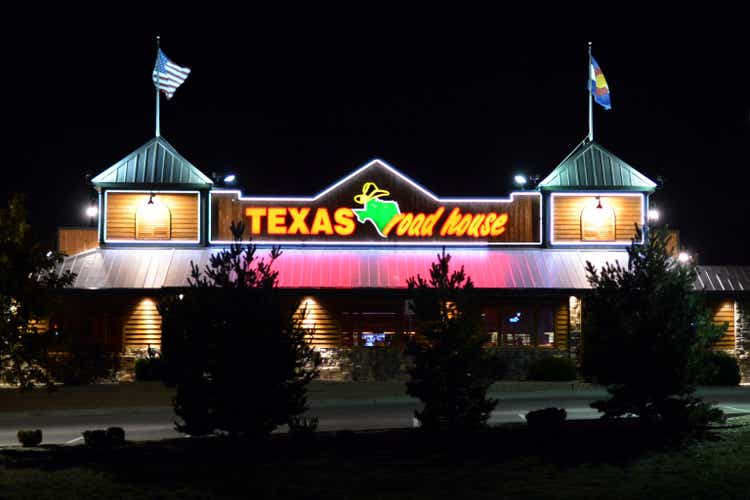 A few months ago I published an article that suggested a pair trade: long McDonald’s (MCD) and short Texas Roadhouse (NASDAQ:TXRH). I also wrote that this pair trade could be reversed. Now, it is time to go over what I wrote to see whether or not I was right and why. But, most importantly, it is time to switch outlook on Texas Roadhouse and start considering when it could become a buy.

Let me recap a few key points I outlined that led me to a bearish rating on the company.

Now, let’s face it. Since July 2022, TXRH has outperformed MCD and the broader market, gaining more than 30%. Once again, it is even more evident that TXRH is not that much correlated to MCD. However, we have to understand why investors have been betting big on this company.

In summary, I believe my bear thesis on TXRH turned out to be wrong because I missed the real time frame by at least six months. In any case, it remained true even this time that, as soon as some sign of an upcoming recession catches attention, TXRH tends to trade down significantly for a while. But, with the same speed, as soon as some pessimism is baked in the prices and we see an initial bear market rally, TXRH takes off once again.

Lesson learned: it is hard to time the market.

So, in this article I would like to avoid chasing the stock, but I would like to go over TXRH’s fundamentals and see what is pleasing investors and whether or not the company may be a good buy for the long-term.

Let’s look at how the company has been performing. My old assumption was that Texas Roadhouse would take a big hit on margins which would lead to EPS contraction. This didn’t prove true. Actually Texas Roadhouse’s 3Q results showed that the company achieved a revenue growth of 14.3% YoY, primarily driven by a 7.9% increase in average unit volume and store week growth of 6.1%.

Comparable restaurant sales increased 8.2%, driven by 7.7% average check growth. Even more important, guest traffic was up by 0.5% with dining room traffic up 3.3%. This is something that caught my attention since driving higher traffic shows the strength this brand has. In this environment, in fact, many businesses are seeing higher comparable sales mainly due to price increases, rather than higher traffic volume.

In addition, the company reported that it is still seeing that dining guests continue to order higher price to entrée.

Another positive data was that if we look at monthly comparable sales, they grew 3.9%, 9.9%, and 10.4% for July, August, and September respectively. Furthermore, the company announced that for the first four weeks of the quarter, comparable sales were up 8.3% as compared to the same period in 2021. We will see in a moment why comparable sales are so important for the company, much more than margin expansion or compression.

Let’s look at some costs. Surprisingly, food and beverage were 34.7% of total sales in Q3, which is just a 9 bps increase YoY. In fact, commodity inflation came in at 8.8%, but the company has been able to offset it through menu pricing. In November 2021, the company hiked prices by 4.2%, then in April it applied another 3.2% price increase. Recently, Texas Roadhouse announced a 2.9% price hike that is now effective (by the way, did you notice the decreasing trend? I think this shows empirically how inflation is slowly cooling off). The company has roughly 70% of its Q4 commodity baskets secured with fixed prices, and this is why it lowered its full year commodity inflation expectation to approximately 10.5%. Moreover, the outlook for 2023 seems even better, with an expected inflation around 5-6% mostly driven by higher beef costs.

It seems like Texas Roadhouse weathered quite well this year. One thing that struck me during the last earnings call was how the goal of the company’s managers is not to offset inflation, but rather to keep on offering a value proposition that keeps on attracting and retaining customers. It was quite clear when Tonya Robinson, the CFO, explained that, even though the company is trying to manage commodity prices,

the goal isn’t necessarily to offset inflation. We want to make sure that we’re really, again, thinking of that value proposition as we usually do. So that’s really going to be the more of the focus for us than trying to increase our margins on a short-term basis.

In other words, the company is not facing the current economic situation as the chance to exploit it in order to increase margins. In a much more long-term oriented strategy, Texas Roadhouse wants to prove to its customers that it is offering the best possible value in the market. This is another way of profiting from an environment where consumers feel inflationary pressure. It may not lead to higher margins in the short-term, but it bonds more customers to the brand and creates more loyalty which, for restaurants, is even more important because it is loyalty that generates recurrent revenue.

If we look at the company’s past track record, we see one a graph that would be perfect, had Covid-19 not happened. But still, though a pandemic hit the world, Texas Roadhouse was back on track and it is still seeing its EPS moving steadily upwards.

Let’s try to understand what is driving this EPS surge. We see that during Q3 margins are improving a bit compared to the rest of the year. In fact, the operating margin came in at 7.58% versus 7.10% last year, but still below the nine month margin which currently stands at 8.36% (vs. 9.05% for 9M21).

The same is true for the net income margin which YoY improved: 6,37% this quarter vs. 6.05% last year. However the overall net income margin for the first nine months of the year is 6.99% vs. 7.48% last year. This shows once again that, though YoY the company is recovering, inflationary pressure is still causing lower margins compared to the first quarters.

So, what is the real driver? Revenue growth, that is comparable sales which grew 14.31%, leading to a net income growth of 18.48%. I think this shows why comparable sales growth is such an important metric for the company and seeing it increase quarter after quarter is indeed among the best signs it is giving to investors. In fact, when we look at the company’s revenues in the past decade, we see how steady this growth has been, without sharp increases or downturns.

Here we are before a company whose main growth driver is the top-line. Top-line companies need either to grow or to increase comparable sales. Texas Roadhouse is currently doing both as it has an expansion plan that aims at increasing its restaurants by 50%, from 600 to 900. This is possible because the company’s opening in smaller centers in rural areas are performing really well, opening for the company new geographies that were not taken into consideration before. In 2023, the company will open approximately 30 Texas Roadhouse and Bubba’s as well as three Jaggers, for an investment that will be around $150 million.

Until the pandemic, the company carried almost no debt and had a net debt negative position, meaning that it always had on hand more cash than debt. In the most recent years, we see that total debt spiked up to the current $772.8 million versus $185.3 million in cash. However, with an EBITDA of $451.3 million and a free cash flow of $209.6 million we see that the company is generating enough returns to cover its debt without any problem.

Here is my revised discounted cash flow model. I think it is fair to credit Texas Roadhouse with a revenue growth of 7%, given the strength we are seeing and its expansion plan. If we consider that the EBITDA margin is usually around 12% and we assume that it will not be the focus of the company, thus remaining stable we have an outcome that shows how the company seems fairly priced, with an upside that is greater than the possible downside. This is why some investors may already want to pick up some shares. However, I think it would be better to wait for a little correction and start buying the stock around $85 in order to reduce some downside risk which is always possible.

This is why I am battled between a buy rating and a hold, choosing this last one in order to wait for a price where the margin of safety may be a little bit more relevant. However, the company is now on my watchlist as one of the most interesting businesses I would like to own in case a buying opportunity opens up.