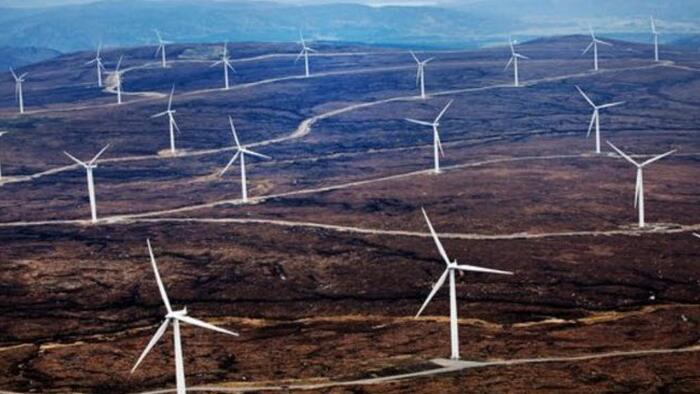 Authored by Richard Lyon via DailySceptic.org,

Suppose that Scotland’s CO2 emissions fell tomorrow to zero, i.e., that, at midnight, the country ceased to exist.

Then according to the “Model for the Assessment of Greenhouse Gas Induced Climate Change” (MAGICC), based on the latest IPCC climate models, the reduction in the Earth’s temperature in 2100 would be…undetectable.

Motivated by the moral necessity and urgency of this goal, the Scottish Government is proposing a novel energy policy – its “Energy Strategy and Just Transition Plan”.

This article reviews its major themes and their implications, and considers briefly the probability of success of the Scottish Government implementing it.

In 2022, due to an insufficient quantity of wind and sun, Scotland’s current collection of wind and solar energy-scavenging devices failed to generate about 70% of their nameplate capacity. Recent exhaustive statistical and econometric analysis of wind generation in Scotland by Edinburgh University shows that it is uneconomic and destined for taxpayer bailout. Under the Scottish Government’s novel energy strategy, wind and solar energy-scavenging devices are to be greatly expanded.

Hydrogen, an energy carrier that squanders in waste-heat a gigawatt of power generation for every gigawatt it carries, is elevated in the Scottish Government’s understanding of energy to the category of a fuel, and also greatly expanded.

They also, in Scotland, provide the power sources that run under all conditions to ensure continuity of energy supply during Scotland’s frequent sunless and windless conditions. These are to be discontinued.

Like all advanced economies, Scotland cannot tolerate even a small measure of power supply fluctuation. Without firm dispatchable thermal standby generation capacity to smooth supply fluctuation, the eventual daily around 40GW amplitude power fluctuation resulting from the proposed expansion of weather-dependent electrical generation must be adapted for use in some other way. This will be provided by some form of 180-plus day, grid-scale electricity storage – a technical challenge for which no precedent exists, and therefore no cost estimate is available.

Converting surplus energy to hydrogen for storage and use at grid scale is unprecedented, and fraught with risk.

Fifty per cent of the proposed new intermittent generation capacity, installed at a capital cost of around £26 billion, is to be wasted in the conversion process.

Hydrogen embrittles pipework, renders conventional valves ineffective and, unlike domestic gas, self-ignites under catastrophic decompression. Quantifying the risks of transporting it in bulk on Scottish roads and deploying it as a substitute for domestic gas in Scotland’s densely populated housing estates might be an exciting 10-year research project at the U.K. Government’s Spadeadam industrial hazard testing facility (“the remoteness of the area is key to their operations” – Wikipedia).

But, informed by what the Scottish Government claims is the need for “the fastest possible” transition, it prefers to bypass thorough safety testing, and to impose live hydrogen trials on Scotland’s citizens. Hydrocarbon gas is to be phased out of Scottish homes from 2030.

Energy densities in energy storage sites located next to Scotland’s towns and cities required by the Scottish Government’s reckless abandonment of thermal standby generation capacity will be measured in millions of tonnes of TNT – a risk for which 12-foot thick reinforced concrete containment domes are installed around nuclear facilities to manage. These risks are entirely unrecognised by Scotland’s current planning processes (or citizens).

The cost of adaptive storage, the cost of the new transmission and distribution infrastructure required by dramatically increased electrification of Scotland’s relatively sparsely populated areas, and the cost of Carbon Capture, are not factored into current estimates of Levelised Cost of Electricity (LCOE). These are vast. Grid-scale battery storage, for example, has an implied cost measured in trillions of pounds, and drives LCOE from £50/MWh to over £600/MWh.

Apparently unaware of the role of nuclear and gas in maintaining continuity of supply, and the prohibitive cost of electricity storage as a substitute, the Scottish Government confidently demands that the U.K. Government “break the link between the price of electricity and the cost of gas to help realise the benefits of the low costs [sic] of renewable electricity”.

The policy proposal cites a number of other benefits that it thinks will accrue in addition to the negligible reduction in the Earth’s temperature.

Electric vehicles can’t plough snow or fields, harvest corn, empty buckets, excavate ore, raise wind-turbine masts, or perform any other economic task for which ‘grunt’ is required. Notwithstanding, from 2030, diesel and petrol engines will be prohibited. Car kilometers are to be “reduced” – possibly by fining us if we travel from our home more than a permitted distance.

The Scottish Government will impose catastrophic environmental damage on the non-OECD countries where millions of tonnes of toxic water and ores are processed to manufacture the EV batteries it is mandating. It will overlook the human rights violations endemic to China’s ‘clean energy industry’. These will have the benefit of promoting what it calls “A Just Transition” – supposedly, a socialist framework for ensuring “a fairer, greener future for all”.

Our security of supply is to be further enhanced by transferring energy generation from domestically produced oil and gas to mechanically unreliable, weather-dependent energy-scavenging devices containing millions of points of failure that are contingent on the supply of rare resources controlled by China – which the U.S. states it will declare war on if it invades Taiwan.

These weather-dependent energy-scavenging devices require oil for, amongst many other things, the manufacture of their exotic advanced materials. A leading energy consultancy records the collapse in 2020 to an 80-year low of replacement oil discovery volumes, and estimates that Western oil firms now have around 15 years of remaining economic oil reserves. It is under these circumstances that the Scottish Government is further enhancing the security of Scotland’s energy supply by discontinuing onshore and offshore conventional and unconventional oil and gas exploration.

To reinforce this enhancement, noting “the damage done by the deindustrialisation of central belt communities in the 1980s”, the Scottish Government is irreversibly disbanding the North East’s oil and gas industry communities and, with them, their 50 years of institutional knowledge of oil and gas operations.

These will be replaced with communities based on livelihoods sustained by a “clean energy industry”. The growth of this imaginary industry has been funded with the imaginary capital (a.k.a. “quantitative easing”) excreted in the response – ironically – to the energy contraction that triggered the ongoing 2008 Great Financial Crash. During this time, U.K. national debt has risen from 60% to over 100% of Gross Domestic Product, exceeded only by the public sector pension deficit (a proxy for the replacement of real industries in the global economy by imaginary ones), which has risen to more than £2 trillion.

As evidence of the sustainability of the policy of funding imaginary industries through the indefinite expansion of imaginary capital (for which, like much of this policy, no precedent exists in human history), the Scottish Government informs us that it has already allocated £5 billion of its record budget deficit to what it refers to as “the Net Zero Economy”.

Winter excess death in the UK’s cold Northern European climate is already around 25,000 a year. Any prolonged interruption of winter energy supply created by the failure of this policy, or further escalation of cost, will plausibly result in the deaths of thousands more of our most vulnerable fellow citizens. The magnitude and uncertainty of the implied costs, coupled to the scale of the energy contraction that this policy deliberately seeks to accelerate, could trigger the collapse of our financial system.

Irreversible impairment of either our energy or financial systems would have a catastrophic impact on the welfare of Scotland’s citizens. Yet few have expressed any desire, much less informed consent, for risk on the scale proposed for such little benefit.

Yet the project, representing a scope of unprecedented scale, cost, pace and technical uncertainty, will be overseen by a Government that is currently struggling to procure two relatively modest ferries for less than the cost that other governments can procure 34 ferries – again, ironically due in large part to cost overruns associated with the attempt to employ novel technologies to reduce CO2 emissions. As evidence of the extent to which the Scottish Government and its advisers have become unmoored from physical reality by the climate catastrophe hypothesis, it’s a document that is fascinating to read, and alarming to contemplate.

After reflecting on it, you may care to offer your feedback, either to the department that compiled it, or your political representative, or on social media.