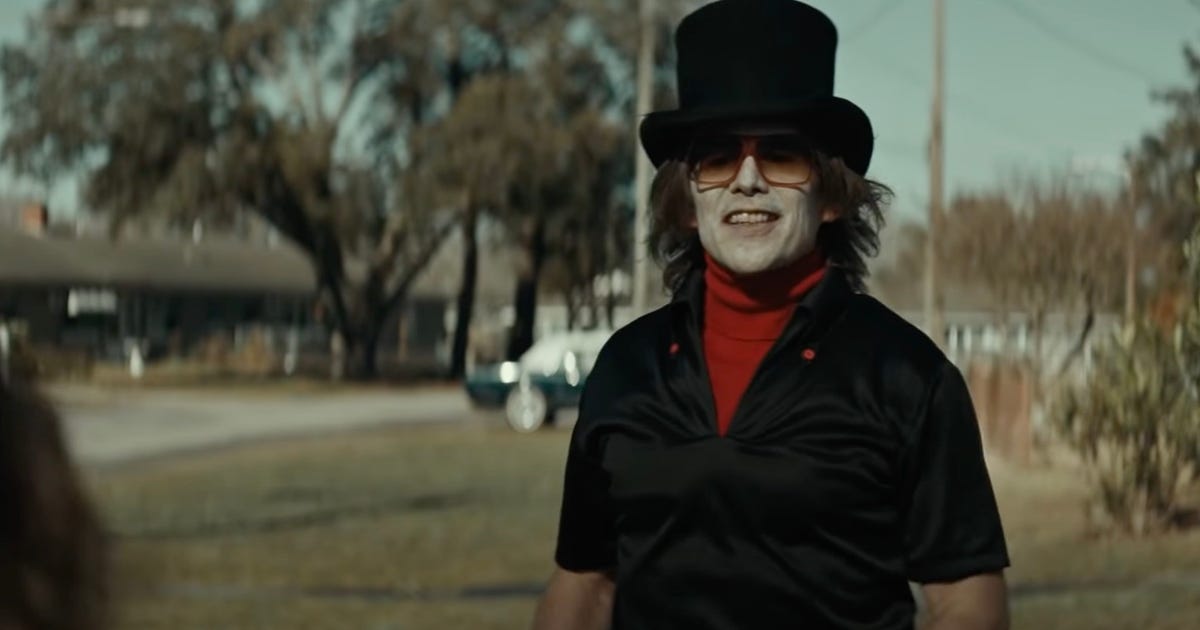 I love Ethan Hawke, though I’m never sure if it’s because I wish he was my flawed father figure or my intellectually stimulating one-night stand. The Black Phone, a 2022 horror-thriller now streaming on Amazon Prime Video, relieves me of this choice by turning the Gen-X heartthrob into an unambiguously odious villain. And I’m into it.

Mix Stranger Things with It, toss in your favorite serial killer miniseries and add a dash of bitters to temper the nostalgia, and you’ve got The Black Phone. If you still haven’t seen this little gem of a mid-budget genre film — yes, you — you should.

Hawke plays fictional ’70s serial killer The Grabber, a “part-time magician” who never leaves home without his trusty bundle of pitch black balloons and can of aerosol chloroform. And he often returns home with a kidnapped pre-teen boy to lock in his murder basement – but not before donning one of his grotesque horned masks. (While the likes of Ted Bundy and even Richard Ramirez have inspired inexplicable lusty fandoms, I guarantee The Grabber’s mask will rob you of your crush on Ethan Hawke, at least for the film’s 103-minute run time.)

The protagonist of the film, mercifully not the serial killer at its center, is Finney Blake (Mason Thames), a young teen who lives with his alcoholic father (Jeremy Davies) and smart-mouthed little sister Gwen (Madeleine McGraw) in the blue collar, perpetual stick season Denver suburbs of the late ’70s. The adults here are absentee at best, abusive at worst. And the kids bloody each other’s noses as much out of rage as to claw their way up a delicate, lawless hierarchy. It’s a bully or be bullied world, marbled with child-led anarchy. On top of all that, boys from the town keep turning up missing, and Gwen’s begun having psychic visions about them.

When Finney himself is abducted, he wakes up on a dirty mattress in The Grabber’s soundproof basement, with nothing but the inoperable, titular landline as company. And, despite its lack of a dial tone, the phone starts ringing anyway. Of course.

The film boasts some impressive horror bona fides: Its source material is a short story written by Joe Hill (ya know, the son of Stephen King?), and its adaptation reunites Hawke with writers C. Robert Cargill and Scott Derrickson for the first time since 2012’s Sinister (ya know, the scientifically proven scariest movie of all time?) If I’d known about this lineage, I admittedly would have been too afraid to watch it. But this is where The Black Phone shines: It’s not actually all that scary.

I mean this as a compliment, not a critique. Rather than luxuriate in explicit sadism for its own sake, the movie instead stokes the stranger danger panic of yesteryear that’s never quite gone away. I’d call The Black Phone creepy, gritty — suspenseful, sure. And yeah, it’s super dark. But its jump scares are manageable (dare I say, perfunctory?) and its violence, at least at the hands of The Grabber, is largely off camera. Finney’s confines? More escape room than torture chamber.

The film is set in 1978, which falls within what’s been coined the “golden age of serial murder,” when, according to crime historians, the vast majority of serial killers (that people know about) were active.

The present era, subsequently, could be considered the golden age of serial killer IP: The serial killer cinematic universe is expanding rapidly, as streaming platforms cash in on the true crime podcast craze with docuseries and “inspired by” scripted shows with built-in audiences. (After the success of Dahmer — Monster: The Jeffrey Dahmer Story, for instance, Netflix announced two more seasons to delve into “other notorious figures who left their mark on society.”) But what I like about The Black Phone — the same thing I liked about true crime spoof American Vandal — is that it’s not based on a true story.

Yay for original storytelling! Yay for standalone movies! Yay for indulging the sick fancies of our ids over a bucket of buttery popcorn without the exploitation-of-innocent-victims-for-“content” hangover!

So who’s on the other end of the black phone’s line? Well, it turns out Finney has a touch of his sister’s supernatural something-or-other, and it’s the deceased former victims of The Grabber calling. The film plays up the creep-factor of these phone conversations, presumably because the test audience wasn’t scared enough, but the ghosts are actually more hype-man than haunting: Each formerly abducted boy has a tip for Finney about how to escape The Grabber’s clutches.

What follows is a Mulan-style let’s-get-down-to-business second act wherein I guarantee you’ll cheer for Finney the way you cheer for a dark horse sports team with a W in unexpected reach.

If you’re a serial killer junkie, a King completist, a Stranger Things superfan — or you just miss watching kids conquer the Aggro Crag — do yourself a favor and give The Black Phone a watch. Come for the thrills and chills, but stay for the incredibly immersive throwback vibes. Or: come for the shirtless Hawke and, when that starts to feel a bit weird, stay for the surprisingly uplifting underdog story and the delightfully satisfying resolution.

New Movies Coming in 2023 From Marvel, Netflix, DC and More